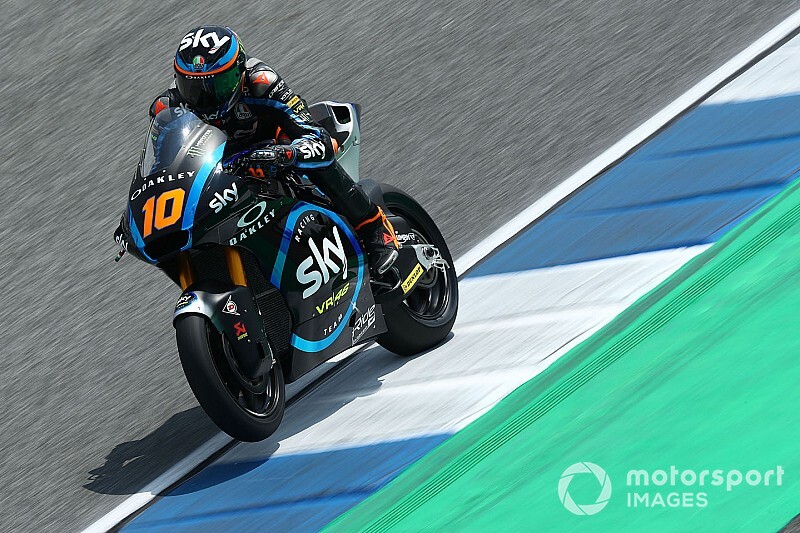 Luca Marini eased to his first Moto2 win of the season in the Thailand Grand Prix, as Alex Marquez extended his championship lead despite missing the podium in fifth.

The Sky VR46 rider quickly made his way into the lead ahead of Marquez from fourth on the grid, and proved untouchable once in front to take the victory by over two seconds.

SAG Racing’s Tetsuta Nagashima grabbed the holeshot off the line from second, but ran wide at Turn 1 and let poleman Marquez come back through, with Marini running close behind in third.

Marini made light work of Nagashima at Turn 3 on the second lap, before carving past Marquez the following tour at Turn 5.

Once clear, Marini immediately built up an advantage of half a second to Marquez, which he would soon open up to over three seconds at one stage as the battle for the final podium places raged behind.

Behind, Iker Lecuona (American Racing Team) gouged time out of Marc VDS man Marquez and was just three tenths behind on the fifth tour.

Marquez resisted the pressure for some time, with Lecuona finally finding a way through on lap 14 at the final corner – though was immediately re-passed at the first corner.

Lecuona made the pass stick with a brave move on the inside of Turn 6 moments later, with KTM’s Brad Binder following him through a couple of corners later.

Marquez would get past Binder at Turn 3 on the next tour, but he would lose third to the KTM rider at the end of the lap and soon came under threat from Augusto Fernandez.

Pons’s Fernandez came close to contact with Marquez at the last corner on lap 17, which left him with work to do to get back on terms with Marquez.

However, this didn’t take him long and the pair debated fourth with five laps to go – Marquez fending him off on the exit of Turn 3 after Fernandez tried to take advantage of the Marc VDS rider running wide.

Fernandez would secure fourth at the same turn a lap later, with Marquez unable to respond in the closing stages.

Ahead, Binder made a daring raid on second at the fast left of Turn 4, but ran wide and allowed Lecuona to strike back.

The pair were line astern as they ran into the final sector of the last lap, with Binder bravely going around the outside of Lecuona into Turn 12 to snatch second, with Fernandez only missing a podium place by four tenths.

Second in the standings ahead of this race, Speed Up’s Jorge Navarro finished outside of the points in 17, while Pons’s Lorenzo Baldassarri’s difficult run continued with a 25th-place finish after an early crash.