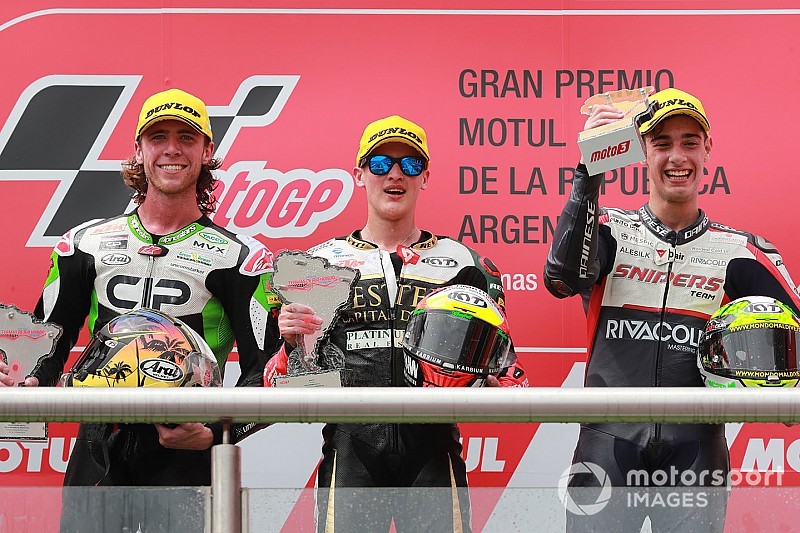 Masia won following a massive crash in the morning warm-up with Sergio Garcia, which forced the latter to skip the race.

The 18-year-old had a scrappy start from pole position and while he was part of the big lead group, he spent most of the race outside of the top five.

He started the final lap, when Darryn Binder (CIP) was in the lead, only fifth, but gained three positions on the back straight to run second behind Gabriel Rodrigo (Gresini) at Turn 5.

The Bester Capital Dubai rider then made a forceful move two turns later, and held off the charge of Rodrigo in the last overtaking spot of the track at Turn 13 to take his maiden victory in Moto3.

Rodrigo tried to retake the lead on the outside line of the corner but ended up being forced wide by Binder.

Lorenzo Dalla Porta (Leopard) was well-placed to win as he led two of the last four laps but in the end the Italian was shuffled back to seventh, followed by fellow Italian Dennis Foggia (Sky VR46).

Dalla Porta's teammate Marcos Ramirez and Kaito Toba (Honda Team Asia) completed the top 10, the latter keeping a two-point lead in the championship, having won the season opener in Qatar.

Toba narrowly escaped crashing out when he was involved in an incident between John McPhee (Petronas Sprinta) and Alonso Lopez (EG0,0), but the Japanese rider was the only one of the three to stay upright.

Aron Canet (EG0,0) was also fighting for the lead for the majority of the race, but in the end settled for 12th while Romano Fenati (Snipers) was a disappointing 16th, three places ahead of Alex Viu (Angel Nieto), who replaced the injured Albert Arenas.

PrustelGP duo Jakub Kornfeil and Filip Salac crashed in the early stages, Can Oncu and Kazuki Masaki both fell at Turn 1, while Vicente Perez had a highside at Turn 13.