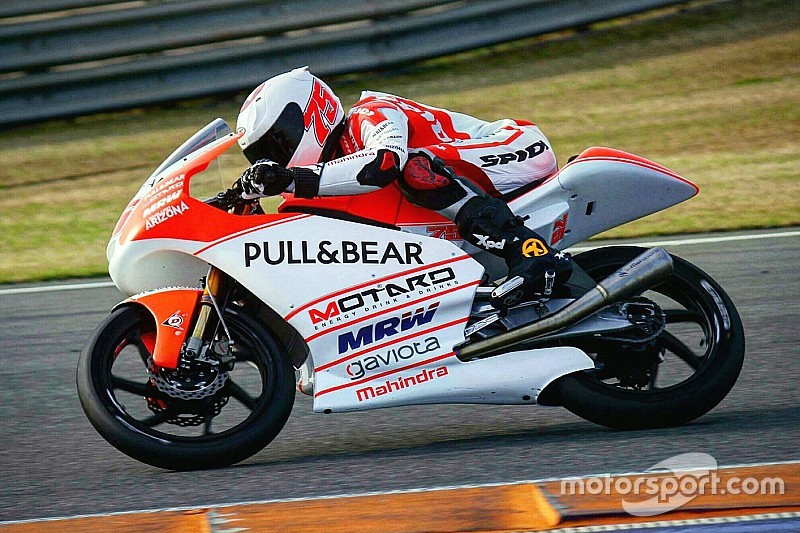 After a fruitful outing at the end of 2016, the new Aspar riders Albert Arenas and Lorenzo dalla Porta were in action at Valencia for the first time in 2017.

The Spanish rider set a time of 1m40.249s, while the Italian remained only fifteen thousandths shy of his teammate's mark to clock a 1m40.264s across the two days.

"I'm happy to be back and start again with good feelings with the team and the bike," said Arenas. "In this test, we started with a new bike.

"We tried to get a good set-up and a good adaptation taking small but consistent steps. We have worked thinking about a race, but also about a single lap.

"We have tried many things, but always with a defined path," he added as Mahindra continues to focus on engine development this year to fight with Honda and KTM.

Likewise, dalla Porta continued to adapt to the Indian manufactured bike as he takes a step up to Moto3 world championship full-time this year.

"I think it has been a very good test, we have been working a lot both days and we have set a good lap time riding alone," the Italian said. "I'm happy with the Mahindra chassis, which works great.

"This weekend, at each stage, we have improved and I have been getting better feelings with the bike and with the team. We will continue working in Jerez, where we hope to take another step."

Meanwhile, the new Peugeot riders Jakub Kornfeil and rookie Patrick Pulkinnen were also at the track, getting their first taste of the Mahindra machinery.

The teams will now continue with its private programme at Jerez in February, before the first official IRTA test set for March 8-10 at the same venue.