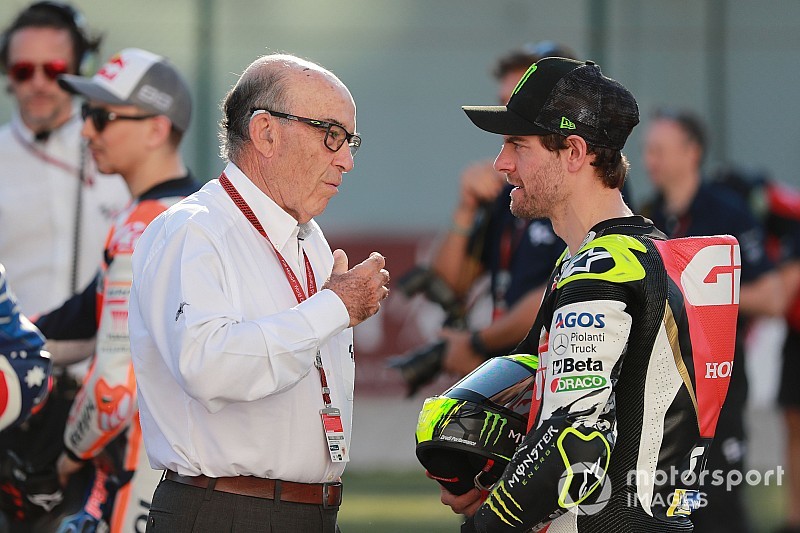 Crashes in pre-season testing at Losail led to concerns that the 8pm local time race start would be dangerous because the falling night temperatures cause dew to build up on track.

After initially hinting that reverting to the 2018 schedule of a 7pm race start was on the cards, MotoGP promoter Dorna elected to stick to the planned timetable and then rejected a further push from riders to bring the start forward following Friday night's Safety Commission meeting.

"It's so strange, you don't really understand the condition when you're riding around, you know it's cold but it can change lap upon lap," said Crutchlow.

"What's going on is: we don't make the rules. I think we've been quite strong with them with regards to what we want, but at the end of the day we can't change it and we can't do anything.

"What can we do? If you're going to sit down and everyone said 'OK, we're not racing', there'll always be three people who will race, and they'll be on the podium. And that's the way it is. If one guy goes out of pitlane, the rest will go out of pitlane.

"I don't think the conditions are good enough at eight o'clock, but I don't make the rules."

World champion Marc Marquez said MotoGP was "taking a risk that is not necessary" by starting the race at 8pm.

Marquez was one of the many riders caught out by the evening conditions on Saturday.

He fell during the fourth practice session that precedes qualifying, as did Alex Rins, Bradley Smith and Johann Zarco.

Zarco then crashed again in qualifying, where Jorge Lorenzo, Tito Rabat and Jack Miller joined the list of riders to have accidents on Saturday evening.

Of those crashes, all bar Marquez's happened at Turn 2 - which Aprilia rider Aleix Espargaro said as the most treacherous spot.

"Corner two is unbelievable - it is ice," he said. "You brake and it doesn't matter how slow you approach the corner, you have to be really careful."

Espargaro said it would have been "super helpful" if the race time had been brought forward and explained that wind was causing as many problems as the temperatures themselves.

"It is a mix because this wind makes the tyre more cold," he said. "Even if the track temperature is not super-low, with the wind it's maybe worse.

"Sometimes it is better to have a little cooler track but no wind."