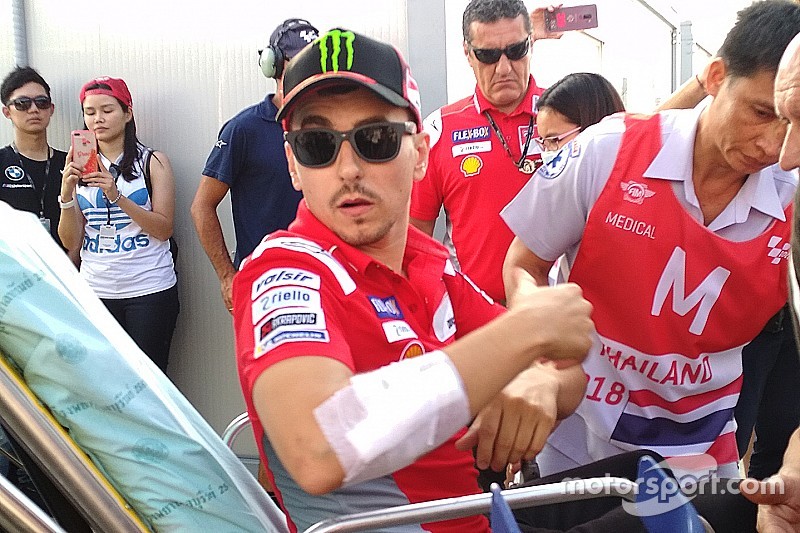 Jorge Lorenzo has decided to sit out the Thailand MotoGP race, and could even miss the next race in Japan due to injuries sustained in his nasty practice crash.

The Ducati rider suffered heaving bruising and contusions to his left wrist and right ankle thanks to what he described as a "scary" shunt during practice at the Buriram circuit on Friday.

Given he was already nursing a foot injury after his first-lap Aragon crash, the Spaniard hinted on Friday evening that he was likely to miss the Thailand race.

He's now confirmed that will be the case, saying scans revealing a hairline fracture in his left wrist a the reason for making the difficult decision.

"As I told you yesterday the chances to compete were minimal, but this was before I knew [from] the scan that I have a fissure in the end of the radial," he said. "So my wrist is hurting a lot.

Lorenzo is also unsure if he'll be fit for the Japanese MotoGP race at Motegi in a fortnight.

"I don't know in what condition I will arrive in Motegi, especially for the wrist," he said.

"For other parts I have no worry, but for the wrist I'm worried about the speed of the recovery.

"The wrist is a very delicate injury for riding bikes. I'm very worried, because Japan is one of my favourite tracks. I would like to arrive there as [well] as possible.

"I would like to believe I will arrive [in Japan], for sure not 100 per cent, but maybe 90 per cent. But I doubt it, because of the wrist. I think the other part of my body will be 95, 90 per cent. But the wrist is the only thing that worries me."

Lorenzo will stay in Thailand to recover rather than returning to Europe.