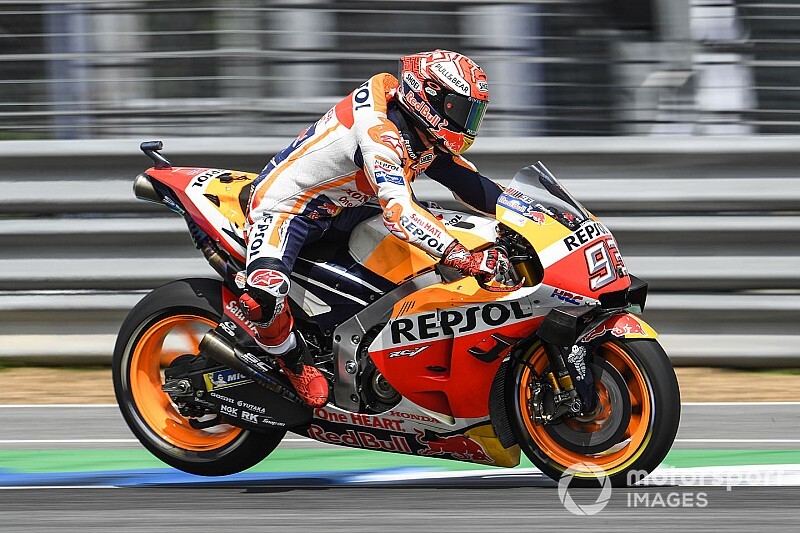 Marc Marquez says the 2019 Honda MotoGP bike being hard to ride does not bother him because it is faster than its predecessor.

Marquez's run to his sixth premier-class crown this year was lauded by rivals as near-perfect, and the champion himself admitted he felt it was his best title campaign yet.

This, however, came against the backdrop of poor form for his Repsol Honda squadmate Jorge Lorenzo, as well as fellow 2019-spec Honda rider Cal Crutchlow of LCR.

Both Lorenzo and Crutchlow have on several occasions expressed a preference for the previous specification of the RC213V, which lacked the straightline speed of the current bike but was easier to ride.

But while Marquez has repeatedly stressed he agrees with their feedback, he has also made it clear he viewed the extra pace as a worthwhile trade-off.

"In some aspects, the 2018 bike's engine was somewhat easier, but the laptimes were two or three tenths slower," Marquez said.

"You need to know if you want an easier bike or a faster bike. I don't care if the bike is difficult as long as it's faster.

"I'm the first one who wants to keep the power but at the same time have more traction and a smoother engine, and that's what all the Honda riders are saying. But the Honda engine has been the same since I arrived in 2013, and that's not going to change now."

Crutchlow, who said earlier this season that the Honda being hard to ride suits Marquez, nonetheless remains optimistic that next year's version of the bike will deliver on the primary target of making it less demanding to ride.

"If you have the best bike in the world and you win by 40 seconds, you’re still trying to improve it. It’s as simple as that. So at the end of the day, I think they [Honda] believe the direction they need to go in," Crutchlow said.

"I tested the ['20 prototype] bike in Brno and felt better than my previous bike now, but then again in Misano I didn’t feel so much of an advantage. But this is normal.

"You have to work with the positives and negatives and give them the feedback, but I look forward to continuing the testing at the end of the year and being able to give the feedback to improve the bike.

"But they are doing everything possible to make the bike more how we all want it, I think."