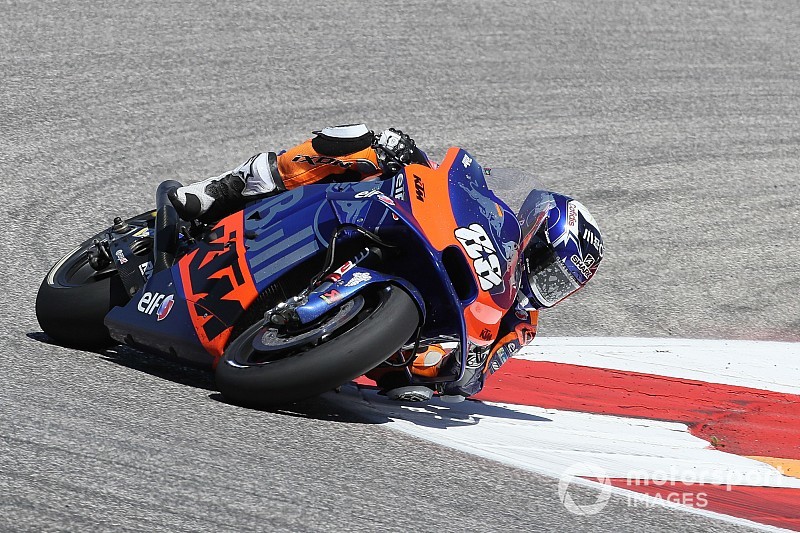 Tech 3 KTM rookie Miguel Oliveira believes the RC16 bike requires a riding style akin to reigning MotoGP champion Marc Marquez to get the most from it.

Oliveira has impressed as a MotoGP rookie three races into the 2019 season, as he scored points on two occasions with a best finish of 11th in Argentina.

The Portuguese rider, coming from Moto2, has had an easier start with KTM than the likes of Johann Zarco and Hafizh Syahrin, who have switched from Yamaha MotoGP bikes.

Oliveira reckons that not being already used to riding another MotoGP bike is an advantage, as the KTM has to be ridden "aggressively" in the vein Marquez rides his Honda.

"That is one of the things, which I believe is an advantage, is that I have no means to compare my bike to other MotoGP bike," Oliveira told MotoGP.com.

"I haven't ridden another one rather than the KTM, so for me it is quite simple, for Johann and maybe Pol [Espargaro] even less because it is his third year with the KTM, but for Johann it's even harder because he is used to another bike and another way of riding.

"For me it is just adapting to a new situation. I believe the way to ride is to be a bit more aggressive, as we see Pol on the brakes especially because it is not that easy to make the bike go into the corner.

"Pol has his unique way of riding the bike and also set-up-wise it is a bit different from me. That is one of the ways to ride the bike, a bit more Marquez-style."

Lead KTM rider Espargaro agreed that turning with the RC16 is not easy, but added that it has significantly improved compared to last year and has become "less physical".

"The engine is going faster and smoother with all the electronics working proper.

"It is less physical than last year for sure so it lets you push until the end of the race, you don't need to take some laps to rest.

"Overall the package is much better than last year but still missing quite a lot.

"For sure the bike is not turning as fast as the others, is a little bit heavier than the others, especially feeling my legs after this [Austin] race, and shoulders, I need to make so much power to turn the bike.

"Also the bike has strong points, in the brakes it is very good, putting the bike inside the corners it is very fast."

How Suzuki got over the Vinales break-up