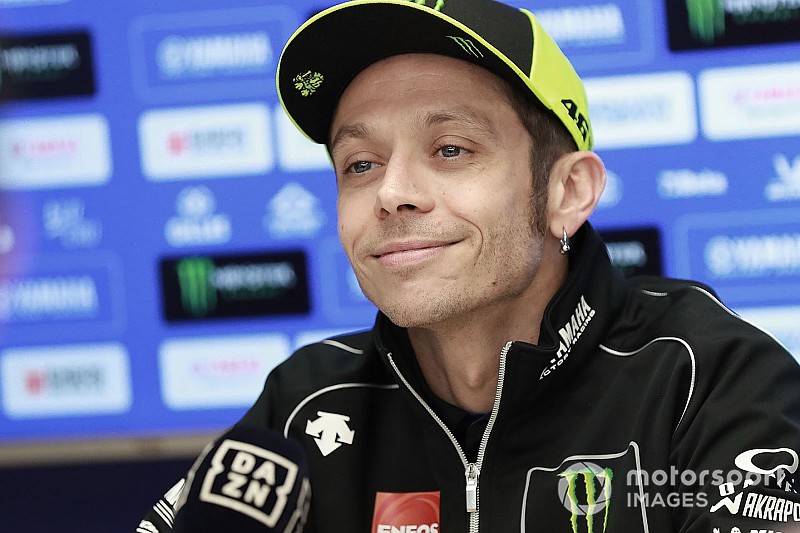 Aleix Espargaro says he “applauds” MotoGP rival Valentino Rossi for the bold strategy that allowed the Yamaha rider to advance from the first segment of qualifying at Le Mans.

Rossi was the only rider among 12 Q1 participants to equip slick tyres for his first run, judging conditions perfectly to put himself out of reach in the damp-track session.

His eventual 1m37.667s effort ended up as the fastest lap of the day and he advanced to Q2 with ease, with other riders getting no closer than a second and a half behind the Yamaha man due to rain intensifying later in the session.

Espargaro, who watched Q1 in his Aprilia garage having already secured a Q2 spot on the basis of practice, commended Rossi's decision-making and ability to navigate the damp circuit.

“I applaud what Valentino did,” said Espargaro, who eventually qualified ninth, four places behind Rossi. “Obviously was less water in the track in Q1 [than in Q2], but what he did was impressive because it's not just about put the slick, you have to do it, you have to do the laptime.

“And [it] was very dangerous really, because it's not about the condition of the track in terms of water or no water, it's the 15 degrees temperature [of the surface]. This makes super-difficult to manage 160kg bike with 300 horsepower.”

Rossi explained that his decision to bet on slicks for the start of Q1 was based on “mainly two reasons”.

“First of all, this year we work a little bit on the mixed [weather] situation, also in Austin, and I feel more comfortable with the bike, we improve the setting and also the electronic,” he said. “Usually in this condition we suffer very much.

“And also I make the FP4 [right before qualifying] with the wet tyres, and I was good because on the wet I feel good, but we arrive at the limit – it was like, faster than this you cannot go.

“So, here the asphalt is good, not a lot of water, we see the water always stay around us, not straight on, so we decide to risk, and paid [dividends].

“I'm happy because it was the right choice and also important for go into the Q2. “

The Italian chose the slicks again for the start of the final qualifying segment, but had to back out and return to the pits, just as Marc Marquez had recorded what ended up being the pole position lap on wet tyres.

Despite missing out on the optimal track conditions, Rossi recovered to fifth place by the end of the session, but he admitted his initial decision had cost him a shot at pole.

“We try another time also in the Q2, because I know that maybe if I'm able to make two laps, maybe you can make the pole position, but unfortunately [the track] have already too much water.

“So I stop and is okay, I'm happy about the fifth place, but it looks like the best moment to make the front row, to make the pole position, is the first five minutes of the Q2, because have less water, especially section one and section two.

“But at the end anyway on the wet I'm not so bad, starting fifth position is perfect.”

Marquez: Qualifying crash a result of my strategy