Valentino Rossi has spoken out against the tight Turn 10 left-hander of the Barcelona circuit where he was taken out in the Catalan Grand Prix, the Italian dubbing it "supermarket parking". 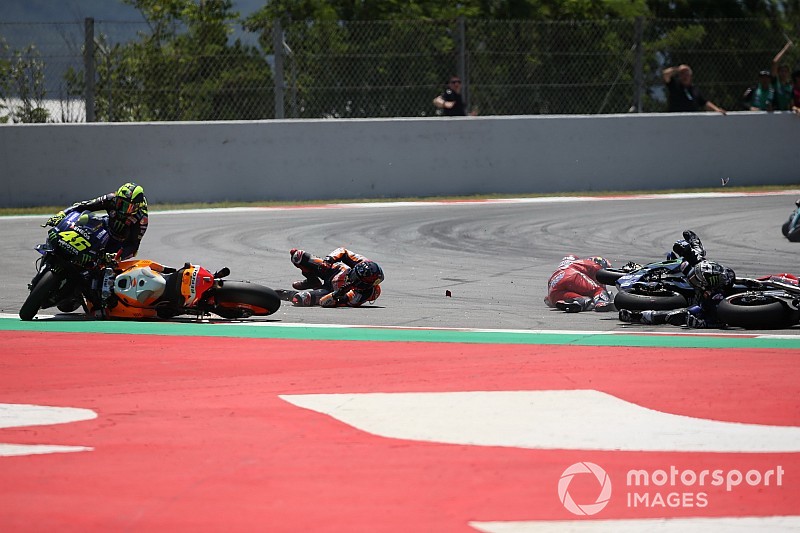 Rossi, along with Maverick Vinales and Andrea Dovizioso, was collected by a crashing Jorge Lorenzo at Turn 10 on the second lap of Sunday's race.

The corner has proven conducive to crashes in the past as well, with Andrea Iannone taking Lorenzo out in 2016.

The turn was first used after Luis Salom's tragic accident that year, and was added to the layout along with the Formula 1 version of the final chicane.

But while the chicane was scrapped the following year and the circuit improved the safety of the track to return to the original version of the last two corners, it never reverted to the old, much faster version of the left-hander at Turn 10.

Rossi was confused why the current tight corner is still in use, which he called "not a race track corner".

"I don't know what happened because we wanted to go on the normal layout for motorcycles in the last two corners, they make a lot of work for the run-off area," Rossi said. "But why we have this corner?

"I try to fight to have the Circuit of Catalunya corner, the long left that is very good. But for some reason, we use this. This corner is like supermarket parking.

"For me is not a race track corner. In a corner like this is easier that happen [crashes]."

Marc Marquez, however, said that there are plenty of similar corners at other tracks, and said that the old Turn 10 wouldn't be safe enough.

"I mean, it's another turn and you need to understand. But the most important is we change the layout for safety, and the other turn – the natural one – the wall is very close.

"In 2015 I already see that I was going out, I was on the gravel and I lean the bike because if not I was in the wall.

"So it's another kind of turn that everybody knows that can be like this, that can have this incident, but for me, in the calendar, we have many turns with this kind of layout."

Marquez's viewpoint was echoed by Dovizioso, who was among those collected by Lorenzo in the crash.

"That corner is not the best, for sure, but we did that for the safety," the Italian said. "There is not enough room on the outside, and there isn't enough possibility to increase that place because there is a mountain, downhill."