Suzuki aims to lose concessions "as soon as possible" 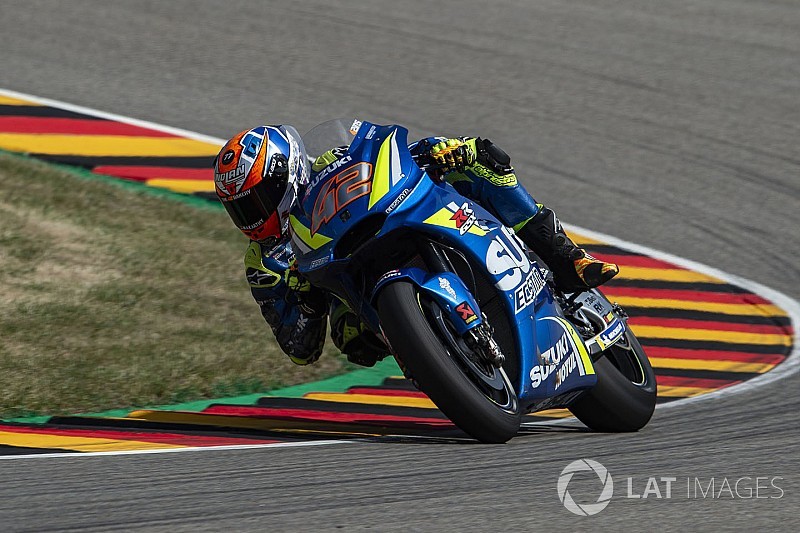 The Suzuki MotoGP team's immediate goal is to lose its concessions "as soon as possible", according to team boss Davide Brivio.

After a 2017 season in which it failed to score a podium finish, the Hamamatsu marque was given back the technical concessions it lost after its breakthrough 2016 campaign.

These included the right to carry out unlimited testing, unrestricted engine development and the opportunity to run a wildcard rider in six events rather than the usual three.

However, an upturn in form in 2018 means that Suzuki is on the cusp of losing these benefits again.

So far the team has scored four podiums this year, with Andrea Iannone coming third in Austin and Jerez and Alex Rins adding a second-place finish in Assen to his third place in Argentina.

It means just one more top-three finish for either rider would strip Suzuki of its concessions, but Brivio says such an outcome would be "good news" for the squad.

“This first part of the season has been very positive and encouraging, and now we have to work even harder in order to finish the season in the best possible way," said Brivio.

"Our target is to lose concessions as soon as possible. We need one more podium to lose them, and that will mean that we’ve continued doing the right things and being on the podium regularly, and this will be good news for Suzuki.

“In the meantime in Japan they are working pretty hard in the development of the GSX-RR bike.

"In Assen we already introduced a new evolution engine that works well. And in Mugello we tried a carbon reinforced chassis.

"So our racing department continue working, and let’s see in the next tests in Brno or Aragon if we are able to try some more new parts to make our package even stronger."

Brivio praised Rins and Iannone for their role in developing the 2018 version of the GSX-RR, saying the process of recovering from its tough 2017 campaign began in the closing races of last year.

“We started working on this task not just this winter, but actually it was something we started during the last races of last year when we found the way to be more consistent in terms of performance and being in the top six in the latest races," he explained.

"Then, during last winter, we really did a good job, especially with Alex, who was growing up and improving his performance, so that was very important in terms of developing.

"He had the opportunity of selecting different options during the winter and this made him more mature and stronger.

"At the same time Andrea also improved his feeling with the bike and his performance, and now we have two competitive riders challenging each other and pushing each other."