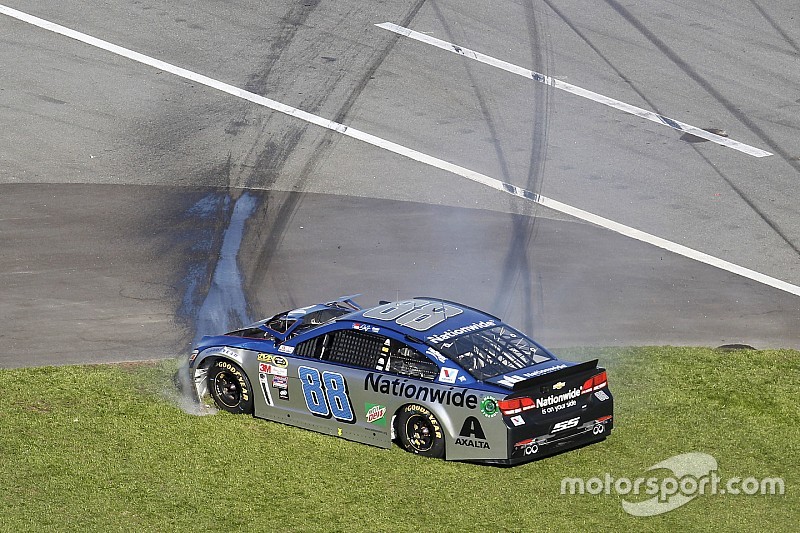 In a similar fashion to his rookie teammate Chase Elliott, race favorite Dale Earnhardt Jr. lost control and slammed the inside wall, nose-first.

After 170 laps of racing at Daytona, NASCAR's Most Popular Driver is done. While running inside the top ten after a cycle of green-flag pit stops, Earnhardt lost the rear of the car while running the high side out of Turn 4.

The No. 88 slid down the track in front of Austin Dillon before contacting the inside wall near pit entry. "Sorry about that, guys," he radioed to the team. The car, nicknamed 'Amelia' after the famous aviator, went back to the garage hooked to a tow truck.

"It caught me by surprise there. I was trying to side draft a guy beside me and boy, it pinned the right front. All the downforce there. We have been working on the balance all day. That was our problem. We really underestimated how important handling was going to be today. We've had a rocket all week, but it was in single car runs and at the night races, the car has handled great. We gotta do a little more drafting I think there the next time we come back and be ready for the balance and the things they threw at us today. We were starting to move forward and get aggressive and I just lost it."

"I've been really working on the balance of the car. I've been pushing real bad all day, especially off of turn four. We just got it really free. We took two tires there and just didn't have overall grip I was hoping for. I was aggressive trying to side draft guys and move forward. We were making some ground on the leaders a little bit so that was looking pretty good because the outside line really hadn't been doing anything all day. Just busted my butt there.