Kyle Busch couldn't catch Jones without 'knocking the wall down' 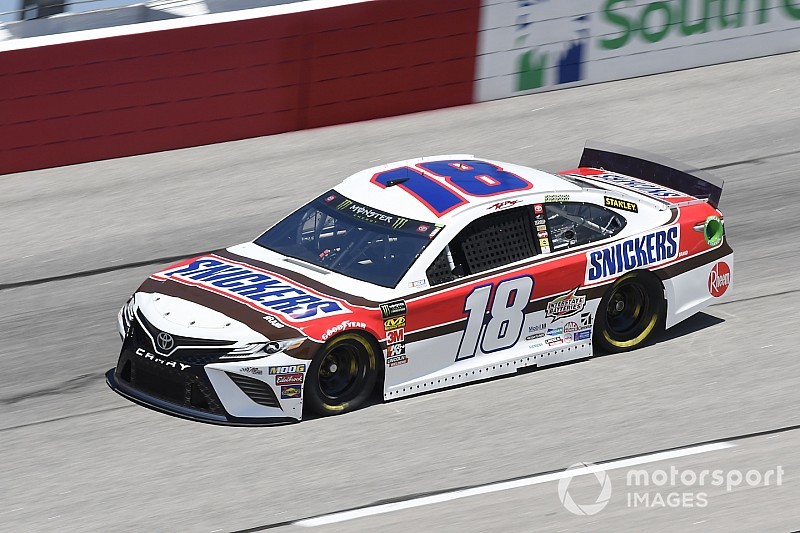 Trying to chase down Erik Jones in the final laps of the Southern 500, Kyle Busch was weary of his right-front tire and the wall.

The wall ended up winning.

After a final round of green-flag pit stops in the rain-delayed race at Darlington (S.C.) Raceway early Monday morning, Busch came out just behind Jones.

As the final laps ticked off, Busch feverishly worked to close the gap and came close several times. But with three of 367 laps remaining, he finally tagged the wall during the chase and hit it even harder with two laps remaining.

The contact didn’t end his race – he finished third – but it did cut short his pursuit of Jones, leaving him with a wider gap over new second-place Kyle Larson.

“When he started to inch out a little bit, I was trying to save my right-front because I knew my right-front wasn't going to make it the whole rest of the way without me knocking the wall down, and I was right,” Busch said of chasing Jones.

“I hit the wall with about four to go and then I hit it again with three to go, and that was – it killed it that time. Luckily, we were able to salvage a third, just dragging the fence for the last two laps.

“I don’t think I've ever seen NASCAR not throw a caution in that scenario – Oh, yes, I have, that’s right. I blew a left-front tire at California in an Xfinity race and we had to finish the whole last lap, so doesn’t surprise me.”

Busch had started the race from the rear of the field due to an engine change, but by the second stage had made his way into the lead and eventually won the stage.

Busch was still leading early in Stage 3 after a round of green-flag stops, but after a caution for a multi-car wreck on Lap 275, Busch went down pit road the lead leader but came out third behind Larson and Jones.

“We kind of lost control of the race there on pit road when we came down the leader and then came out third,” Busch said. “I thought if we could just keep in touch with those guys and keep close to them, then we might be able to out-pit road them at the end of the race, and we did one of them but not the other one.

“You just can’t get there with this package. Just such a one-lane race track. There’s not enough options, there’s not enough grooves that you can get enough air on your car to close that gap and make that pass.

“That was the best we’ve run here in a long, long time, so that was fun. It was nice to lead some laps, be up front like that, but I hate it that we got behind on pit road and then we couldn’t make it up on the track. That kind of sucks.”

There was a significant consolation prize for Busch’s efforts, however. His performance did allow him to clinch the regular season Cup series championship with one race remaining before the playoffs.

He earned an extra 15 playoff point bonus for when the 10-race title chase begins in two weeks at Las Vegas Motor Speedway.