Kyle Busch: Second at Sonoma "sucks" but "good for the company" 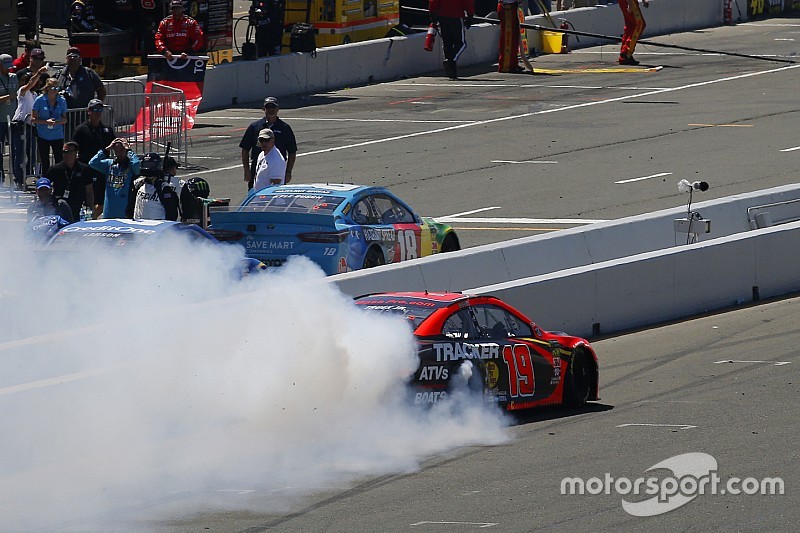 Kyle Busch didn’t have a car that looked like a winner but he certainly gave Martin Truex Jr. a scare.

An accidental run-in with Ryan Blaney on Lap 47 of 90 in Sunday’s Toyota SaveMart 350 left the nose of Kyle Busch’s No. 18 Toyota caved in.

Although the damage initially concerned Busch’s team, it never appeared to disturb the car’s performance. Late in the race, Busch made his final pit stop three laps after Truex, hoping to use slightly fresher tires to his advantage.

For a while, it worked.

He began with about an 8-second deficit with just over 20 laps remaining in the race. With 10 to go, Busch had shaved Truex’s lead down to 1.5 seconds.

“Any time I had to lean on the left-rear (tire), I just didn't have the drive that I needed. Actually, tried to hold on to it, trying to save it. I knew that was going to be our problem,” Busch said after the race.

“That had been our problem all day long. You get closer, you’re like, ‘Okay, I can get him, I better go, pounce on him fast, so then he doesn't have the time to pick up the pace.’ But it didn’t work.”

With five to go, Truex’s lead stabilized and without any additional issues he ended up besting Busch by 1.8 seconds at the finish.

“He was obviously saving a lot. I knew he was going to be saving a lot, have enough to be able to most likely hold us off,” Busch said about Truex. “I was right. I still tried everything I could to get there and ran real hard.”

Busch, never one to be happy with a second-place finish, seemed upbeat that he and his Joe Gibbs Racing team were in the hunt for the win.

“Our Camry was fast. Real proud of that,” he said. “We came here a little better this year than we have in years past, so that felt nice.

“It sucks to finish second to a teammate, but it’s good for the company. Overall Martin is really, really good here. I’m just pumped that I actually ran good here.”

Through 16 races, Busch and Truex have both won four times each and JGR as a whole has won 10 times. Busch remains second in the series standings and Truex fifth.

No win for Kyle Larson at Sonoma but "better than normal"