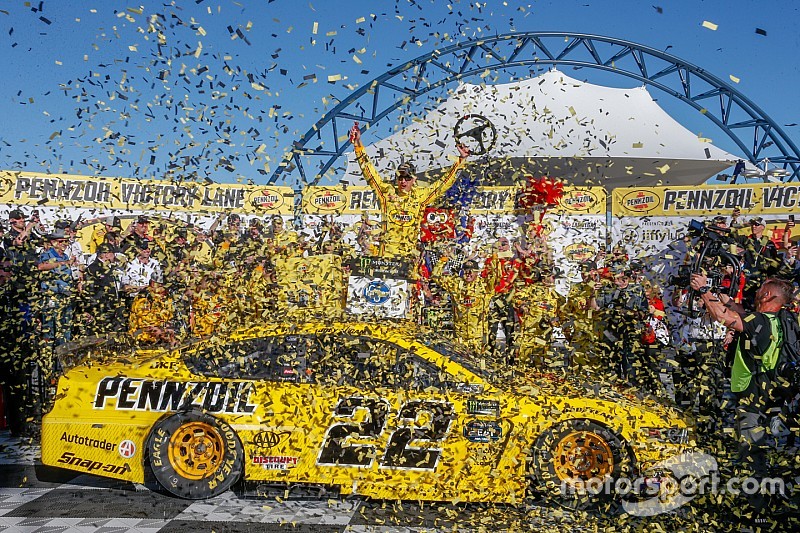 Keselowski got a big run coming through Turn 3 and briefly got side-by-side with Logano off Turn 4 before Logano was able to block his advance and hang on for the win in Sunday’s Pennzoil 400.

The win is Logano’s first of the season, 22nd of his career and first at Las Vegas Motor Speedway.

"I told everyone from Pennzoil today - this race is bigger than the Daytona 500 for them - and I said we're going to do doughnuts on that giant infield logo after the race and we were able to do it," Logano said.

"What a great race. Brad and I were so evenly matched and you just can't drive away. In the last five or six laps, Brad was catching me so quick and I got stuck behind a lapped car. Man, it was so close. Lot of fun, my hearts still running hard.

"It's a nice feeling to get locked in the playoffs early."

Asked what he was thinking with his teammate closing fast in his mirror, Logano said: "Yeah I figured he'd run up against the wall there and he made up more ground than I thought he would. He made such a good run and I just barely cleared him there at the end.

"Team Penske going 1-2 shows the kind of speed we've got this season."

Following the break between Stages 2 and 3, Kurt Busch did not pit and inherited the lead when the race returned to green on Lap 168. He was followed by Logano, who was first off pit road, then Harvick and Hamlin.

With 80 laps remaining in the race, Harvick was finally able to get around Kurt Busch and reclaim the lead. Logano ran in third, Keselowski fourth and Almirola had made his way up to fifth.

On Lap 193, Logano also got around Kurt Busch and moved into the runner-up position.

With 60 laps left, Keselowski had made his way up to third, Kurt Busch fourth and Kyle Busch made his way to fifth.

As a handful of cars began green-flag stops, Logano got around Harvick to retake the lead on Lap 211. By Lap 215, most of the lead-lap cars were making their way down pit road for what could be their final stop of the race.

Keselowski was in second, about a second back, followed by Harvick, Kyle Busch and Kurt Busch.

On Lap 240, Keselowski was to get around Logano and take and reclaim the lead.

Logano went to the inside of Keselowski off Turn 4 on Lap 244 and grabbed the lead right back.

With 20 laps remaining, Logano led the way followed by Keselowski and Harvick – all within a second of each other.

Logano was able to stretch his lead to over a second on Keselowski with 15 laps remaining. Harvick was right behind Keselowski, trying to take the second spot. Kyle Busch was running fourth.

With eight laps to go, Logano put Jimmie Johnson a lap down, leaving 18 cars on the lead lap.

Keselowski says he was "a touch too nice" to Logano