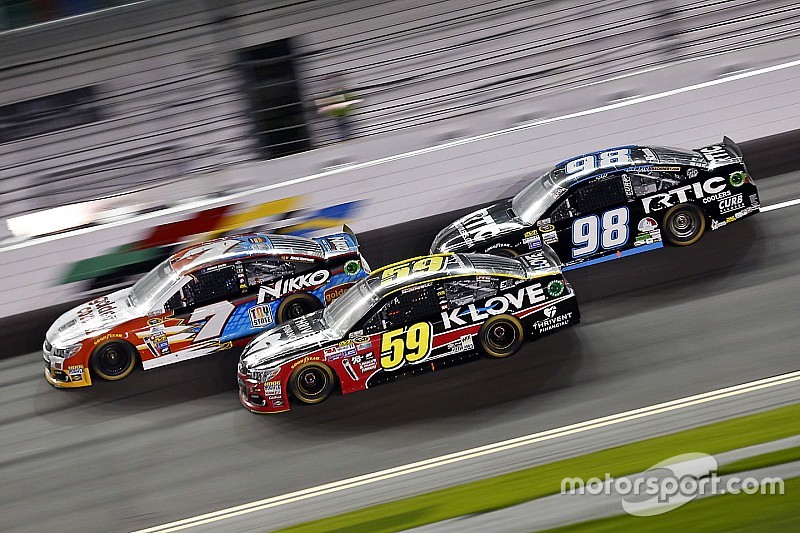 The starting lineup for the 58th running of the Daytona 500 is set after the Can-Am Duels at Daytona on Thursday night.

In the first Duel, Michael McDowell held the transfer spot for the majority of the race, but after green-flag pit stops, he had Cole Whitt on his bumper. Whitt attempted to make a move and ended up losing control, spinning out and losing his shot at making the Daytona 500.

"He was being an idiot, juking around and spun himself out," radioed Regan Smith after the accident, who was running directly behind the No. 98 Premium Motorsports entry.

On the final restart with 13 to go, Josh Wise held the coveted transfer spot, running 13th. McDowell made his way around him, but the pass was rendered moot by what Ryan Blaney was able to achieve. After falling a lap down due to an unscheduled pit stop for a loose wheel, he had battled his way back up into the top five, finishing third. His finish meant that McDowell was in the 500 based on his qualifying time from Pole Day, not his Duel result (14th). Wise was 17th and Whitt 22nd after retiring from the race.

"We just got done making a green-flag stop there and Cole and I were side-by-side," McDowell told Motorsport.com in a post-race press conference. "I was able to get by him on pit road and then he had a run coming with two or three cars. So that was that moment when if he slingshots by me and I lose the draft, so I fought as hard as I could to keep him behind me.

"I didn't see what happened behind me but I saw that it got crazy real fast."

The theme of the second Duel has to be teamwork. While a trio of Gibbs cars led the field for over half the race, Matt DiBenedetto was running inside the top ten, attempting to secure his BK Racing teammate Robert Richardson Jr. a spot in the field.

Not a single caution flag waved until the last lap of the race when a multi-car accident at the front of the pack. Like Blaney, DiBenedetto was the top open team at the checkered flag (despite not needing to be), finishing ninth. Richardson placed 18th, but made it via his qualifying time, thanks to his teammate's efforts.

It's a heck of an honor to be racing in my first Daytona 500 and on top of that, to get all four of our BK Racing cars into the race for Sunday, so that was neat. I've dreamed of this since I was five so I'm excited," said DiBenedetto, who will be making his debut in this race on Sunday.

The feel-good story of the night

Richardson has to be the classic underdog story of this race: A soft-spoken racer who showed up as a late entry with a repurposed Xfinity Series fire suit. "I got to thank Mike Ford and all of our crew for the hard work and determination they've had this weekend for being a makeshift crew put together in the last couple of weeks.

"Two weeks ago when I got the call to run this race, I was mowing the hay pastures. I’m just very blessed to be here.”

At the age of 33, this will be his third start in the Daytona 500 in four attempts.

"I've been in (the Daytona 500) before, but this one is very special to me and to my family. My wife and I welcomed our brand new baby boy in December. Every bit of earnings from this race is going to go into a college fund for him. The good Lord is looking down on us and blessing us and got to give glory to him."

Both David Gilliland (12th) and Reed Sorenson (21st) missed the 500 after Duel #2, joining Wise and Whitt from the first qualifying race.