Harvick: SHR's plan was "all about survive and advance" 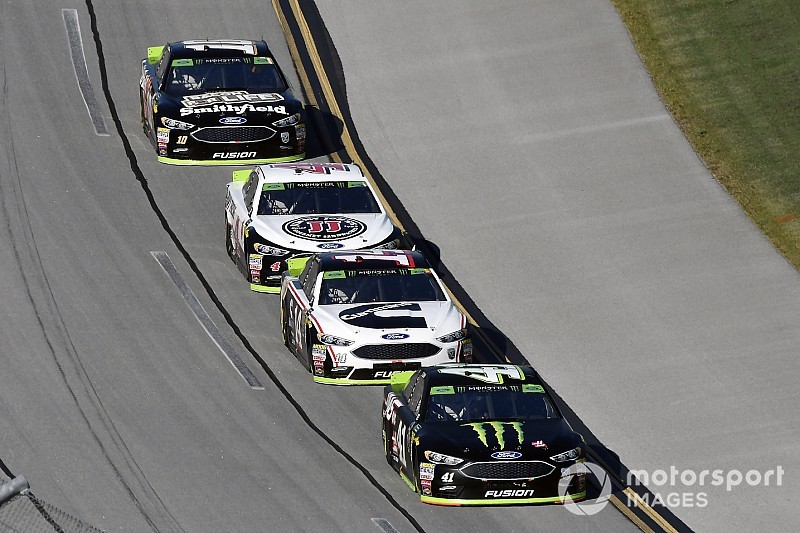 In the case of Sunday’s NASCAR Cup race, all four SHR cars made an conscious to stick together on the track, deciding if all could finish well, all would be in a better position for next weekend’s cutoff race at Kansas.

The plan was working to perfection until a late-race caution which sent the 188-lap race into overtime. Before taking the green for the final two laps, Harvick was forced to pit with low fuel pressure.

During the overtime, both Kurt Busch – who was leading – and Bowyer encountered the same issue. That left teammate Aric Almirola in Victory Lane, coasting home ahead of Bowyer.

“I’m just really proud of everybody at Stewart-Haas Racing. Mine sputtered there on the fuel pressure and it dropped down in the red and they did the right thing of coming in and pitting and not taking a chance,” Harvick said.

“You just need to put yourself in a position to where you’re good for next week and just glad that one of our cars won and happy for Aric. We planned on working together and I think knowing how fast our cars are it all worked out really well today.

“Sometimes that doesn’t all go as planned.”

Almirola’s win locks him into the third round of the playoffs. With one race remaining, Harvick sits 63 points above the cutoff, Busch is 30 above it and Bowyer is 21 points to the good.

That means SHR will have a very good chance at all four cars coming out of Kansas still with a chance to win the championship.

“We’re good to the next round points-wise, so that was really our goal coming into today to try to do everything that we could to put ourselves in a position to go to Kansas and just race,” Harvick said.

“That’s great for the team mentally to give the guys and Rodney (Childers, crew chief) and everybody kind of a mental break in this part of the season to just go to Kansas and be able to race the car and not have to worry about points or stage points or anything like that is what you want to do.

“For us, we did a good job last week, we did a great job today and wound up in a good position for Kansas. It’s all about survive and advance at this point.”

Taking teamwork to another level

SHR’s competition director, Greg Zipadelli, said the organization talked a lot about cooperation coming into this race after squandering what it thought could have been a good opportunity last weekend at Dover.

“I think after last week, we didn’t do a great job executing as a group, because we could have had the same result,” he said. “I just think everybody said, ‘We need to help each other, work together like teamwork, show everybody that we are teammates.’ I felt like our cars were strong enough that if we did that, we would have a very strong day.

“We came in here with (Almirola and Bowyer) needing stage points. Everybody executed that perfectly. Then at the end of the race, let’s do everything we can to help each other. Everybody knew the circumstances.

“We pay these guys every week honestly to be selfish, take care of themselves, run as hard as they can and finish up as high as they can, win as many races as they can. Everybody gave and took today.”