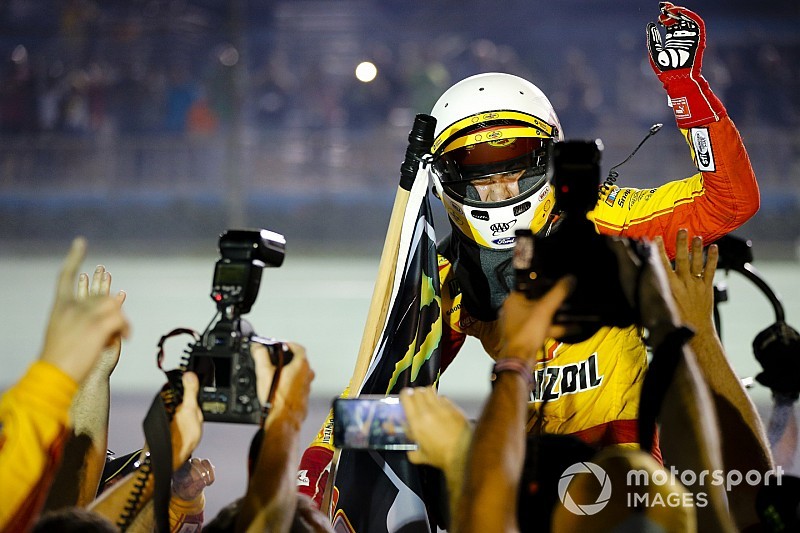 Move over “Big 3” – you have to add a fourth: Joey Logano is the 2018 Monster Energy NASCAR Cup Series champion.

The win was the third of the season for Logano, who was overshadowed much of the year by his fellow title contenders Truex, Kevin Harvick and Kyle Busch (who combined for 20 wins).

"We did it! We won the championship! I can’t believe it," Logano said. "I don't know what to say. This team, (owner) Roger Penske, (crew chief) Todd Gordon, the pit crew. Oh my God.

"They gave me the car I needed at the end to do my job. Put me in position to do my job. I couldn’t be more proud of them. We won the championship! Oh my God!”

Logano, as he had said all week, repeated that he never considered himself the underdog in the championship race.

"I told you we weren’t and showed you why were not. We were the favorite like I told you before the race started. I am so proud of everybody for rising to the occasion. We executed down the stretch like nobody’s business," he said.

"We got Ford not only the drivers championship but the manufacturers’ championship. I can’t wait to break that Mustang out.”

Asked to describe he emotions when he came to the checkered flag, Logano said: "Just a lot of screaming. I think I pulled a muscle. Man, I worked my whole life to get here. To win a championship. We have been so close.

"It has been 10 seasons of fighting for this. I wasn’t sure we were going to get it but Todd made a good adjustment at the end and we had that no quit attitude.”

Truex ended up second in the race, Harvick was third and Kyle Busch fourth and the Championship 4 swept the top four positions.

The championship is also the first for Ford Motor Co. in the Cup series since 2004 (Kurt Busch won with Roush Fenway Racing).

“This means so much for Ford Motor Company and all of our employees that work so hard. I just can’t believe this right now," said Mark Rushbrook, global director of Ford Performance. "We have worked so hard for the last three years to build up the program and to have this 2018 season and have 19 wins, the manufacturers’ championship and the drivers championship.
"It is incredible to have the company achieve this with the help of our partners, Team Penske and Roush Yates Engines. It is incredible.”

Following the break between Stages 2 and 3, Logano was first off pit road followed by Harvick, Truex, Kyle Busch and Kyle Larson. The final stage went green on Lap 167.

Logano went to the inside of Harvick and reclaimed the lead exiting Turn 4 on the restart. Truex moved into second and Harvick dropped to third.

With 77 laps left in the race, Logano held a small lead over Larson, with Truex in third, Harvick fourth and Kyle Busch running fifth.

With 74 to go, Larson – while running in second – hit the wall twice and fell off the pace, doing significance damage to his No. 42 Chevrolet.

All of the lead-lap cars elected to pit with Logano once again the first off pit road, followed by Truex, Harvick and Hamlin. Kyle Busch had another slow stop and lined up ninth on the restart with 68 to go.

With 65 to go, Logano held a small advantage over Truex with Harvick in third. Kyle Busch moved up to fifth.

All four title contenders ran in the top four with 60 laps remaining in the season finale as Logano maintain a 1.2-second lead over Truex.

With 49 laps remaining, Truex got around Logano to take the lead for the first time in the race. Harvick ran third and Kyle Busch was fifth.

Truex opened up a 1.7-second lead over Loganp with 40 laps left in the race. Harvick remained in third while Kyle Busch ran fifth.

A final round of green-flag pit stops kicked off with Harvick heading to pit road with 37 laps remaining. Truex and Logano soon followed on the next lap. Kyle Busch remained on the track.

Truex had a slow pit stop as his No. 78 Toyota fell off the jack before the tire was on.

Before Bush elected to pit, Brad Keselowski got into Daniel Suarez and sent him spinning into the infield and brought out a caution.

All of the lead-lap cars pit with Kyle Busch first off pit road, followed by fellow title contenders Truex, Logano and Harvick. The race returned to green with 15 to go.

Logano powered into the lead with 12 to go.