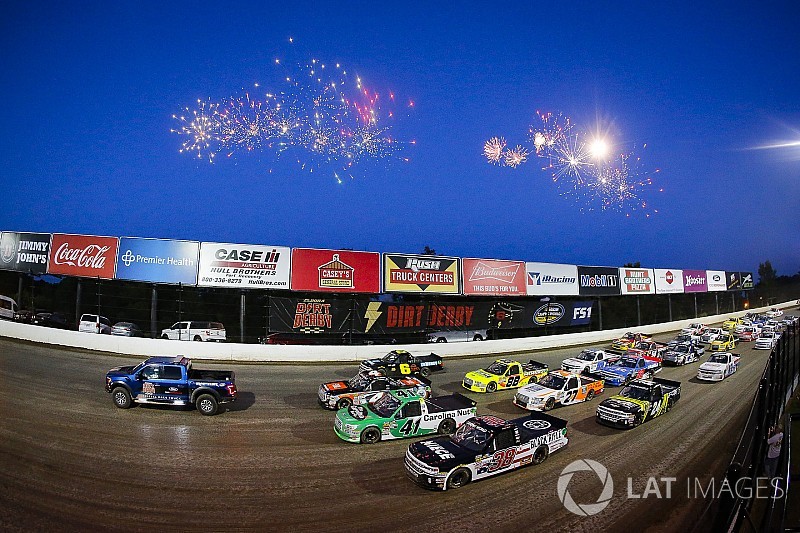 In this week's edition of the NASCAR Roundtable, we discuss dirt races in NASCAR and what to expect at Pocono Raceway this weekend.

The NASCAR Camping World Truck Series race at Eldora appeared by many accounts to be another successful event with an exciting photo finish. Do you feel NASCAR should do what Tony Stewart suggested last week and explore an Xfinity race there?

Jim: While the dirt race at Eldora Speedway is certainly entertaining, no team makes any money by participating in that race. It has the lowest sanctioning fee in the series - a deal NASCAR cut with Stewart in order for it to be hosted there. Unless and until it is financially feasible for teams to run these events - not to mention they still need to figure out a way to do pit stops there - the Truck race at Eldora should remain the lone dirt event.

Kenny: Hate to poo-poo what appears to be a popular idea, but I think the Eldora event should be the only points race contested on dirt. Because the series doesn’t race on dirt every other week, it makes that particular event unique. It’s also held at a legendary venue. Leave well enough alone. Please.

Nick: Personally, I would like to see a single dirt race in all three national divisions and of course, Eldora would be a prime candidate. It's a way to connect NASCAR back to its roots and add a little more flavor to the series.

Tim: I think running at Eldora has been of the best ideas everyone associated with NASCAR has had in recent memory. With that being said, I would keep it as the only event and that will help it maintain its status as a truly unique and special event in NASCAR.

The series returns to Pocono Raceway this weekend. Do you see Martin Truex Jr. keeping pace with Harvick and sweeping the year at the track this Sunday?

Jim: While Truex has been on his game of late, for some reason I feel we will have a driver will pick up his first win of the 2018 season this weekend at Pocono. As I mentioned before, several teams seem to be closing the gap on the top guys and I predict one of them breaks through on Sunday, with my favorite being Kyle Larson.

Kenny: Quick stat: Kevin Harvick’s AVERAGE running position at Pocono earlier this year was 1.83. How on earth did he wind up finishing fourth? As for Truex, his average finishing position in his last 10 starts is 3.9 – including wins at Pocono, Sonoma and Kentucky. Can he sweep Pocono? Oh yeah, definitely. But he will have to beat Harvick to do it.

Nick: Pocono is a strange race. It seems like every time the series visits that track, it's a toss-up between monotonous and predictable to chaotic and surprise winners. I want to yes, he'll sweep, but I'd have to agree with Jim's assessment that we could see another new winner.

Tim: I definitely think Truex can sweep Pocono, but I feel he’ll have to beat Harvick - and Kyle Busch - to do it. I also think we could see someone like Ryan Blaney, who scored his lone Cup win so far there - surprise everyone and pick up a win as well. It should be a good race.

Jimmie Johnson is the last driver to win ten or more races in a season back in 2007. Kevin Harvick picked up his sixth win of the season last Sunday. Do you think he can be the first to reach double-digit wins since Johnson this year?

Jim: As of right now, I don't see Kevin Harvick and his No. 4 Stewart-Haas Racing team slowing down anytime soon. I certainly think Harvick can break the 10-win barrier this season but I also think one of the other of the top three - Kyle Busch and Martin Truex Jr. - could as well if they get on a roll. There are some signs the rest of the field is beginning to catch up to the "Big 3" but I still think they will dominate the series well into the playoffs.

Kenny: I not only think Harvick can win 10 or more races this year, I think it will be something of a disappointment if he doesn’t. Success in NASCAR is cyclical, good teams run well for only so long. The key is to keep riding the wave as long as possible. Remember, the team won only twice last year.

Nick: I think we will see two drivers reach double digit wins. Harvick and either Kyle Busch or Truex could very well reach ten wins if they keep up their dominance, especially into the playoffs. From my research, it appears two drivers reaching ten wins in the same season hasn't happened since 1974, so that would be quite a feat.

Tim: I think Harick can get 10 wins this season and it could come before the playoffs even start. In fact, based on the performance of the ‘Big 3’ drivers so far this season, we could finish with two drivers winning 10 races this season. That would be incredible to see in this age of the sport.

Chase Elliott appeared to be aggressive and very fast on Sunday at times in New Hampshire, did you see anything from him on Sunday that makes you think he's closer to scoring his first win?

Jim: Chase Elliott's performance at New Hampshire, especially his stage win, was a big step not only for him but also Hendrick Motorsports. They certainly hope it's a sign the organization has turned the corner. If so, I still believe Elliott is the most likely of the Hendrick group to make it to Victory Lane first this season.

Kenny: The fact that he was up front and leading laps, something he’s done only three other times this season, bodes well for Elliott and the team. The more experience he gains from being up front, defending a lead and running in clean air will be a big help. I think the Hendrick Motorsports teams overall are getting closer with the new Camaro. Is Elliott any closer to that first win? I would say marginally, not significantly.

Nick: It was good to see Elliott be able to go up against the likes of Truex and pass him for a stage win, so that's without a doubt a step in the right direction. He's been knocking on the door for sometime now and I'll be very surprised if he goes another season without visiting Victory Lane.

Tim: It was nice for Chase Elliott, Chevrolet and Hendrick Motorsports fans for sure to see Chase up front on Sunday. I think the team is getting better and closer to a first win. I would be surprised if the first win 2018 from Hendrick came from other than Elliott or Jimmie Johnson. For their fans’ sake, I hope the team can back up last week’s performance at Pocono this weekend.