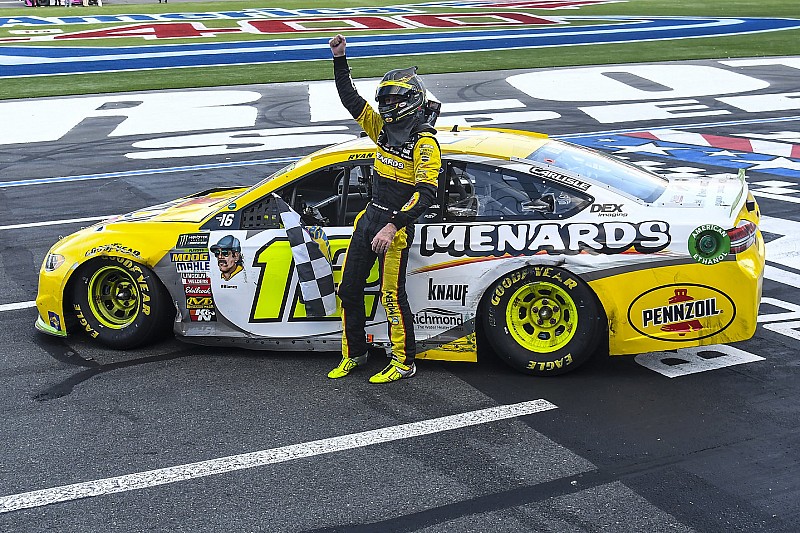 Ryan Blaney ended what he thought would be his toughest round of the NASCAR playoffs with a win which puts him in a very good position.

Blaney entered Sunday’s Bank of America 400 at the Charlotte Motor Speedway Roval clinging to the final transfer spot to the second round of the NASCAR Cup Series playoffs.

“We were most nervous about Round 1. There were some tracks in there that weren’t very good for us,” Blaney said. “Richmond we’ve struggled at, and (Charlotte) you just didn’t know what was going to happen, and we didn’t have the best day at Las Vegas, which is usually a good track for us.”

After some struggles, Blaney managed a fifth-place finish at Las Vegas but ended up 19th at Richmond, which left him ranked 12th out of the 16 playoff drivers heading to the Roval.

The goal was get as good a finish as possible in the race and the team used pit strategy to help capture the victory in Stage 2, which padded his points total.

Some late-race cautions helped Blaney moved up to third on the final restart with three of 109 laps remaining and when leader Martin Truex Jr. and second-place Jimmie Johnson wrecked in the final turn, it cleared the way for Blaney to pick his first series win of the year.

The win locked Blaney into the second round and suddenly his championship prospects got a whole lot brighter, in large part to the playoff-point haul he took away from Charlotte.

“We put ourselves in a good spot, and it worked out for us. When I was running third, I was just thinking about points,” he said. “We were good on points, and I was cool with just riding around in third. But then that situation happened, and we happened to be there.”

Blaney’s owner, Roger Penske, believes the best for Blaney may still lie ahead this season.

“For him to get in the playoffs, this next stage, is monumental for his career, and I think his confidence,” Penske said. “In fact, he said to me in Victory Lane, ‘Look, I can really go in this stage,’ because he likes those tracks.”

Round 2 begins Sunday at Dover (Del.) International Speedway, followed by races at Talladega (Ala.) Superspeedway and then Kansas Speedway.

In his first trip to Dover this season, Blaney finished eighth and he was 18th at Talladega in the spring, but as he mentioned Team Penske has been very stout on restrictor-plate tracks recently.

Kansas may be Blaney’s best track without a win. In seven career starts, he has three top-five and four top-10 finishes and has won a pole. He started second and led 54 laps at Kansas in the spring before getting caught up in an accident.

“The first round we were worried about it just because some places we struggle and some of the unknowns.  But second round, hopefully it goes well – just good tracks for us,” Blaney said.

“That's really all we were talking about is places we have run decent at. Even though (Talladega) is a wild card, I think our speedway stuff is okay, so hopefully we can just stay out of trouble there.”

SMI's Marcus Smith on Roval: "I feel like this is unique to Charlotte"