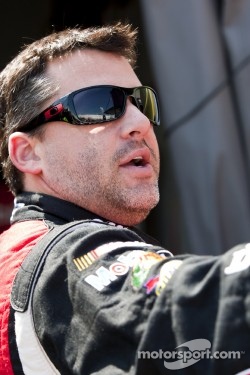 KANNAPOLIS, N.C., (Sept. 15, 2011) – Despite a year in which Tony Stewart is still winless, the driver of the No. 14 Office Depot/Mobil 1 Chevrolet Impala for Stewart-Haas Racing has plenty of reason to be bullish in this weekend’s Bear market.

The NASCAR Sprint Cup Series is taking top billing in the Windy City as the Chicago Bears play the second game of their NFL season down in New Orleans while Stewart and 42 other drivers compete in nearby Joliet, Ill., at Chicagoland Speedway. Hyping this weekend’s event in downtown Chicago for two days before a wheel is even turned on the 1.5-mile oval are the 12 drivers vying for this year’s championship, among which is Stewart.

The two-time Sprint Cup champion is making his seventh appearance in the Chase for the Sprint Cup – the 10-race slugfest that will determine this year’s title-winner. Chicagoland kicks off the campaign for the first time this year, and it’s Stewart whose track history at Chicagoland suggests he will make his case for a third Sprint Cup crown immediately.

Stewart has a presence at Chicagoland that would make the longstanding political powerbrokers of Chicago proud. Of the 10 Sprint Cup races Chicagoland has hosted since its appearance on the Sprint Cup tour in 2001, Stewart has scored a pole, two wins, four top-threes and seven top-fives. He has only finished outside the top-five three times, and his average finish at Chicagoland is 9.5. His laps-led tally is at the top of the charts, too, for his 396 total laps led are 70 more than his nearest competitor in this category, Jimmie Johnson.

With a reconfigured point tally that’s been wiped nearly clean, Stewart’s bid for another championship begins anew. He starts round No. 1 of the 10-race Chase only 12 points behind series leader Kyle Busch. And with Chicagoland being one of Stewart’s best tracks, there’s good reason to be bullish on Stewart in this Bear market.

TONY STEWART, Driver of the No. 14 Office Depot/Mobil 1 Chevrolet Impala for Stewart-Haas Racing:

With two wins, three top-twos, four top-threes, seven top-fives and the most laps led of any other Sprint Cup driver at Chicagoland, you have a pretty good track record. How comfortable are you at Chicagoland?

“I think I’ve always been good there. You look at the past and we’ve had some weird events. On Fridays, I’ve had two events where I’ve crashed in practice. The first time (2004) Hermie Sadler blew a motor and, before the caution came out, I crashed in his oil and went to the hospital and I missed the rest of the day. And then, the very next year, I blew a tire in practice and J.J. Yeley had to qualify for me. It’s one of those places where, as long as I get through Friday, I feel like we’ve got a shot at it. But I don’t watch the stats very much. You just take it week to week. Technology in this sport changes so fast. What was good the last time you were there doesn’t mean it’s going to be good the second time around. You constantly have to work. You’ve got to keep pushing the envelope. It’s a place I like. This place is really getting racy as far as finally being able to move around and change lines and run anywhere from the bottom to the top. It’s a fun track because of that.”

So, what will win the Chase – consistency or wins?

“I think consistency. You could go out and win four or five races, and have one bad day and lose the championship. With the fact that you can get 43rd-place points, that can kill you better than the wins can help you. All it takes is one bad day, and you’ve lost your opportunity to go to Vegas. It’s that simple. Until they give the 12 Chase drivers their own points structure, that’s the reality you have to face. If you have that one bad day, it’s going to eliminate you out of that possibility.”

“Honestly, not as much as I should. It’s such a good feeling knowing that we have that opportunity. Obviously, things have changed a lot in the last couple of years with the way the Chase is constructed. But just to have that opportunity each year is something every team is striving for. Now that we’re locked into that position, we’ve got 10 weeks to go out there and make that become a reality again.”

You’ve made the Chase despite not having won, yet. Will that be a drawback because other drivers in front of you already have a head start in the points because of the bonus points they earned for each of their wins during the regular season?

“No, not really. We’re in and that’s all that matters right now. There are guys who won a race this year who didn’t make it. I think we were consistent and that’s what got us into the Chase. However, we’re going to have to consistently be a little bit better the next 10 weeks to get it done.”

This is your seventh appearance in the Chase. Does your mindset change from regular season to the Chase?

“Not really. We’ve just got to take it one week at a time like we’ve been doing. I think these last two weeks (Atlanta, finished third; Richmond, finished seventh) have been pretty good for us. It hasn’t been perfect, but it’s been good. We’ve still got a little bit to go here, but I’m proud of the gains we’ve made, and I’m really proud of my guys. Hopefully, this will get the team pumped up and ready to go again.”

Is there added pressure that comes with competing in the Chase?

“I don’t think there’s any pressure on us going into the Chase. In all honesty, I think we’re kind of an underdog going into it. I think we’ve got everything to gain and nothing to lose in this Chase. It’s not the best scenario to be in, but it’s a good position to be in knowing all we’re doing is looking upward and not worrying about going backward.”

You said after the cutoff race to the Chase at Richmond that you and the team needed to step up your game. Do you still feel that way?

“Yes. We just haven’t been where we need to be this year. So, yes, we do. There are guys like Carl Edwards, Kyle Busch, Jimmie Johnson, Jeff Gordon, who are on their game right now. They’re not making any mistakes. Kevin Harvick is the same way. You get in these last 10 weeks, you’ve got to have your ducks in a row and have everything right. You’re not going to back into the championship. There are too many good guys who are going to get this done and hit their marks every week.

“Don’t get me wrong, I’m excited about the Chase. I don’t ever show up at the racetrack with the attitude that I don’t think I can win the race. We get to come to Chicago this weekend and we’re starting from scratch, basically. We’re 12 points behind. It can be done from here. We’ve got to get off to a good start this weekend at Chicago. Then, hopefully, when we come down to Homestead, we’re going to be the champions.”

If you haven’t had the greatest of seasons by your standards, doesn’t it still speak to the resolve of your race team that you’re in the Chase?

“We’ve just had one of those years where it’s been hard to stay pumped up. When you have some of the weirdest things happen in races like we’ve had, it’s hard to stay positive and hard to stay motivated and upbeat. There are only so many times you can go back to the shop and into those team meetings and tell those guys, ‘Hey, it’s going to be OK.’ After a while, you’re wondering if you’re convincing yourself that it’s OK. It’s hard, but I think it shows the camaraderie that we’ve got with the whole team. Ryan (Newman, teammate) and Tony Gibson (crew chief for Newman) have been awesome the last three weeks, doing everything they can to help us be better to get into the Chase. That’s just kind of the attitude our whole shop’s had. We’ve all been working together. We’re working as an entire organization to get both these cars in, so I’m really proud of our Stewart-Haas Racing team.”

“By theory, yes. But you could have 50 championships under your belt and still finish 12th in points. Just knowing how to deal with the pressure is probably the biggest thing. Knowing what’s going to happen and what positions you’re going to be in when those last two or three weeks come up – if you’re one of those guys who still has a legitimate shot of winning the championship – that’s the kind of experience you’ll want to have gone through.”

The rainbow returns to Jeff Gordon's No. 24