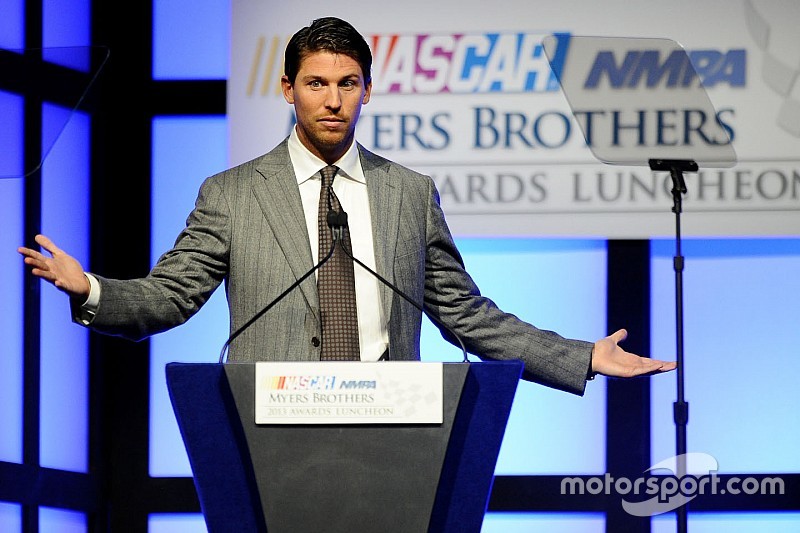 With the assistance of NASCAR, drivers assemble to create line of communication with sanctioning body.

DOVER, Del. — The formation of a NASCAR drivers council is well on its way.

NASCAR met with a group of its top Sprint Cup drivers on Saturday night at Dover Downs in what was the second of such meetings.

About nine representative from the drivers side and the same number from the sanctioning body met to discuss a variety of topics including competition and safety in what lasted just under two hours. Denny Hamlin said it was “fair to say” that he had been organizing the driver-side of the program — which has been in the works just shortly after the Race Team Alliance was formed last July.

“It was good. In my opinion, the first process to making our sport better is to have open dialogue, you’ve got to get all the ideas out there as to what could make our sport better and safer. All those things kind of came to the forefront yesterday.

Hamlin said the reason for the select group was to form one voice from the driver fraternity. But there were others from the sport represented as well.

“There was a process of who was going to be in the meetings,” Hamlin said. “Obviously, you can’t have 43 guys in there. It becomes counterproductive, so there was a process to figure out who was going to be in those meetings. I think everyone is well represented – all the manufacturers, guys from top to bottom in the standings. Overall, this is a good process that is going to allow us to make our sport better.

“Everyone that needed to make decisions was in there. And really some of the drivers from young to old to inexperienced to experienced, top of the standings to the bottom of the standings. Everyone was well represented and I thought it was very productive. I think the fans are going to have something to look forward to in the future with these changes and really the drivers themselves, we talked about a lot of safety issues we want to see changed at various racetracks. We went racetrack by racetrack and I feel like we’re going to make our sport better.”

Not a new concept

Dale Earnhardt Jr., believes the ability for the drivers to assemble improves the lines of communication between the garage and the sanctioning body.

"NASCAR asked us to do that, so we could just get together and have a better ability to communicate, driver to NASCAR, NASCAR to driver," Earnhardt said. "It’s just a better platform, a better way to have discussions—everybody wants the same thing, so we’re just trying to work together. There’s better communication and better dialogue that way. They tells us why they make the decisions they make, and we can understand why they make ‘em when we’re sitting there talking to ‘em. It’s been a group effort."

Long before this most recent gathering of drivers, the late Dale Earnhardt would assemble the NASCAR's top influencers in the garage and kick around ideas. Earnhardt Jr. says he didn't learn anything from those meetings, he's just glad that NASCAR took the initiative to do this.

"I think it gives us all a better opportunity to sit down and have discussions and kind of understand why they’re making the decisions they make," Earnhardt said. "We can talk about potential ideas to make the sport even better in a good, controlled atmosphere, so it works really nice.

"NASCAR brought up the idea of doing it and asked us to sort of form a group of guys through a vote or however we wanted to, so that’s what we did.It’s good to be able to sit down and talk about the decisions we’ve made, what they think about it and what we want to do to get better. We always want to provide a good product, and we all need to be working together, and NASCAR wants the drivers to be involved in that conversation, so that’s why they brought us in there."

“I think any time you can have dialogue with NASCAR I think it’s a step in a good direction,” Harvick said. “It’s not really something that’s abnormal to have dialog with (NASCAR). It’s obviously, more structured. It was good."

NASCAR said there has been open dialog for some time with the driver. Brett Jewkes, Senior Vice President & Chief Communications Officer, released a statement to that effect.

“NASCAR meets with drivers frequently on a wide range of topics," Jewkes said. "As part of our ongoing commitment to foster dialogue between all stakeholders, we've met formally with drivers on several occasions this season, including here at Dover.

"We'll meet with them again later in the season as normal course of business. The meetings have been productive and we find the dialogue very valuable.”

Still, the Saturday night's meeting is expected to offer drivers more input in the decision-making process.