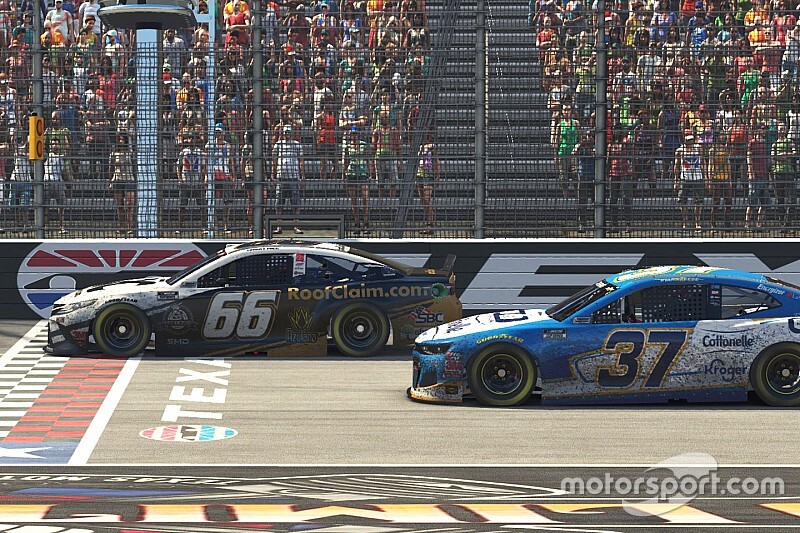 With a bump-and-run and later a photo finish, Timmy Hill emerged victorious in the second ever eNASCAR Pro Invitational Series event at virtual Texas Motor Speedway.

The 125-lap race got underway with pole-sitter William Byron leading Dale Earnhardt Jr. at the start. It was very clean in the early running until a backstretch pileup involving Kyle Busch, Ryan Blaney and several others nearly 20 laps in. However, the incident did not bring out a caution.

The first true yellow flag flew on Lap 27 for Christopher Bell and Michael McDowell on the frontstretch.

The field dove down pit road for fresh rubber and fuel with Byron winning the race off ahead of Ryan Preece, John-Hunter Nemechek and Timmy Hill.

Kligerman was able to force his way up into second on the restart behind Byron. Earnhardt filed into third until another caution on Lap 39 for Anthony Alfredo in Turn 3.

Homestead winner Denny Hamlin and Chase Elliott stayed out during this caution period and led the field to the green for the ensuing restart. Preece took control and led the way for seven laps until Nemechek got around the No. 37 machine.

Byron then returned to the top spot on Lap 67 and controlled the race for some time during the longest green-flag run of the event. 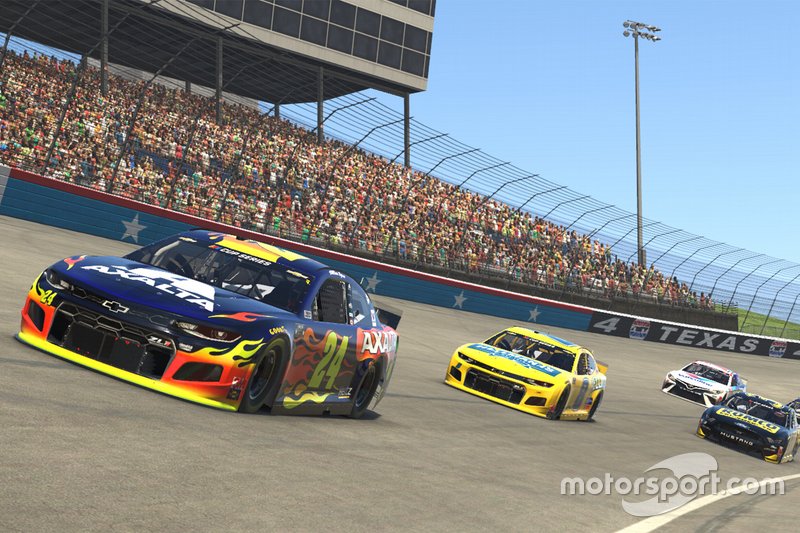 William Byron on the lead

Running tenth, Earnhardt popped the wall out of Turn 4 and took a trip through the grass before rejoining the race.

With roughly 45 laps to go, the field started to file down pit road for green-flag pit stops and things did not go smoothly for several drivers. Nemechek spun sideways, as did Labbe trying to get their cars slowed. Byron pitted from the lead on Lap 89 but encountered no issues, coming out with the effective race lead.

But it was Earnhardt who took over the actual top spot on track, pushing the run as far as he could before pitting with 19 laps to go.

The caution flew three laps later for Daniel Suarez, who tried to intentionally crash Ty Dillon. He was later parked.

The race went back green with 11 laps to go with Byron leading Hill, but was quickly back under yellow for a crash in the back.

Racing resumed with five laps remaining and Hill took over the lead after putting the bumper to Byron entering Turn 1.

Soon after, contact behind him sent Preece through the grass and several cars spinning on the frontstretch. Byron was now back outside the top-five.

The race went into overtime and became a two-lap shootout. Race officials called for no more yellows, so this would be the final restart of the race.

Hill got away as Smithley and Preece battled over second. On the final lap, Preece was able to make a charge to the inside out of Turn 4 but couldn't quite get there as Hill took the checkered flag.

"That was exciting," Hill told the FOX Sports booth. "I can't believe it. That was such a fun race there. I had to do a little boot scootin boogie here in Texas on Willy B, but glad to pull the victory off."

He then added: "The amount of messages I’ve already gotten; my phone is blowing up. I see we’re trending on Twitter, and it’s just a really nice feeling. I’ve been in the sport for 10 years, this is my 10th season in NASCAR, so this is a win. It’s really neat to get this and hopefully we can pull some wins off when we go back racing in the real world."