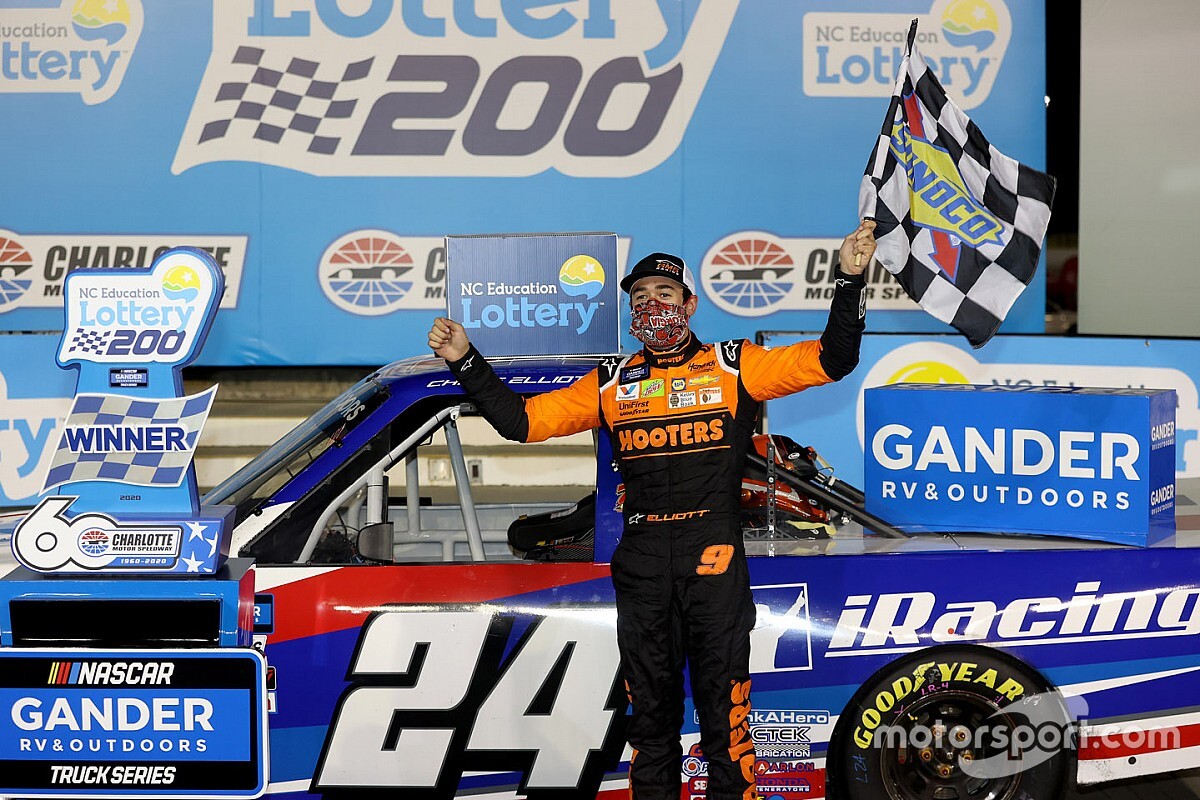 Elliott held off a furious challenge from Kyle Busch and held on for the win in Tuesday night’s N.C. Education Lottery 200 at Charlotte Motor Speedway, ending Busch’s seven-race winning streak in the series.

Elliott’s win came with an added bonus – he collects a $100,000 bounty – which will be donated to a COVID-19 charity of his choice – for beating Busch in the race.

"It was a lot of fun. This truck was really good from the get-go and having no laps and the splitter needing to be where it needed to be," Elliott said. "It doesn't make up for Sunday's (Cup race) but it was a really good night. I was glad to win and do some good for the relief efforts for this virus.

"Kyle was a little better than I was at the end. I got tight and I don't think we adjusted enough on that last (pit) stop. I didn't really know what these things needed as time went on. Luckily, the right-front (tire) stayed on it long enough to get to the end and I think he burnt up his stuff pretty hard trying to get to me.

The bounty, a combination of $50,000 put forward from Cup Series driver Kevin Harvick and another $50,000 from Gander RV and Outdoors CEO Marcus Lemonis, was created prior to the Truck Series race originally scheduled for Atlanta in mid-March before the COVID-19 pandemic put the 2020 season on hold.

Harvick challenged any full-time Cup driver to defeat Busch in one of his four remaining Truck races this year.

Tuesday night’s race was the first for the Truck Series since Feb. 21 at Las Vegas. It was also the third of four NASCAR events being held in successive days at Charlotte without fans. The final event is a 500k Cup race at 8 p.m. ET Wednesday.

Following the break between Stages 2 and 3, all the lead-lap trucks elected to pit with Elliott the first off pit road.

On the restart on Lap 69, Elliott was followed by Ben Rhodes, Busch, John Hunter Nemechek and Todd Gilliland.

Gilliland gave Busch a nice push which helped Busch move quickly into the lead on the restart as Austin Hill moved into second.

On Lap 81, Stewart Friesen got into the back of Jesse Iwuji in an incident that also collected Brennan Poole and Tyler Ankrum and brought out the first non-stage caution of the race.

On the restart on Lap 87, Busch led the way followed by Hill, Elliott, Moffitt and Nemechek.

Moffitt moved quickly around Busch to grab the lead on the restart only to see the caution return for a spin by Natalie Decker that also collected Poole.

Several drivers elected to pit but Busch remained on the track and continued to lead the way on the restart on Lap 93.

Garrett Smithley wrecked on Lap 96 in Turn 2 to bring out a caution. Busch took the opportunity to pit for his final set of new tires. On the restart on Lap 101, Smith led the way followed by Ankrum and Elliott. Busch lined up 23rd.

Gilliland wrecked in Turns 3 and 4 on Lap 102 after contact with Nemechek to bring out another caution. On the restart on Lap 108, Smith led followed by Elliott and Johnny Sauter. Busch restarted 12th.

Sauter got around Smith on the restart to take the lead as Busch powered into the top-five.

With 24 to go, Elliott made his way past Sauter to reclaim the lead while Busch had moved into third.

Busch grabbed the runner-up position with 20 laps remaining, and immediately began closing on Elliott for the lead.

With 10 laps to go, Elliott’s lead over Busch remained at less than half-a-second with Smith running third.

Elliott took the Stage 2 win, grabbing the lead on Lap 44 and expanding his lead to more than 4 seconds over Rhodes at the finish.

Nemechek was third, Matt Crafton fourth and Busch rounded out the top-five.

Following the break between Stages 1 and 2, most lead-lap trucks elected to pit but Smith remained on the track. On the restart on Lap 38, Smith led the way.

Raphael Lessard quickly moved into the lead on the restart after a push from Christian Eckes. Crafton powered around Lessard on Lap 40 to grab the top spot.

On Lap 44, Elliott went to the inside of Crafton and took over the lead for the first time in the race. Busch, who pit again during the stage break, had worked his way back up to eighth.

With 10 laps remaining in the second stage, Elliott had stretched his lead over Crafton to more than 2 seconds.

After 55 laps, Rhodes had moved into the runner-up position, almost 3 seconds behind Elliott.

Chastain, who started 27th, made his way to the front and held off Hill to take the Stage 1 win, his first stage victory of the 2020 season.

Rhodes started on the pole but Hill got around him quickly on the start to grab the lead on Lap 1.

On Lap 16, NASCAR threw a competition caution to allow teams to check tire wear. Many lead-lap trucks elected to pit – including Busch – but Hill stayed out and remained in the lead when the race returned to green on Lap 21.

Busch restarted in the 33rd position.

With less than 10 laps remaining in the stage, Hill held a small lead over Crafton with Chastain having moved up to third. On Lap 24, Chastain moved into the runner-up position.

After 35 laps, Chastain began challenging Hill for the lead. He finally got around Hill for the top spot on Lap 38.