Harrison Burton: "We have our (playoff) destiny in our hands"

There’s no secret of the pressure on Harrison Burton this season, but rather than try to deflect it, the 18-year-old embraces it. 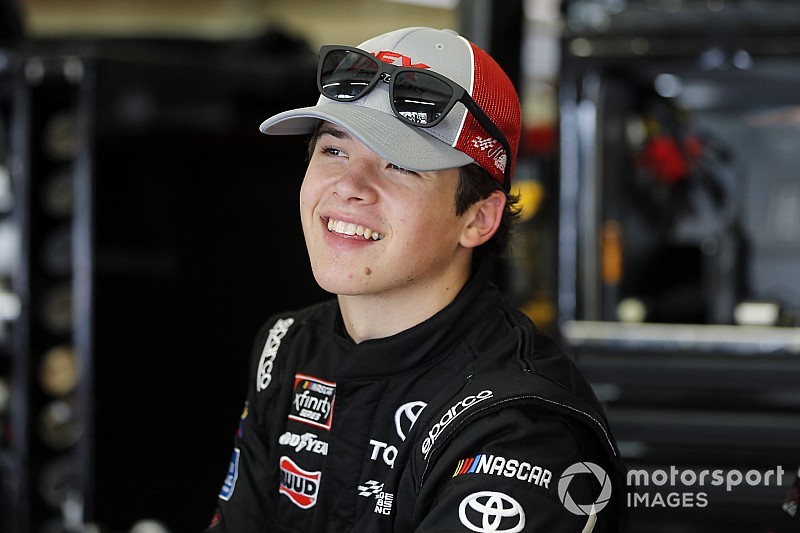 It’s the only way he knows how to race.

“I like being in situations that are challenging and find a way to come out victorious,” Burton said Friday at Pocono Raceway. “I’m driven by moments like these – a season that you worked your whole life to get to and for me right now it’s to contend for a championship in Trucks.

“I’ve worked my butt off to get here and now I’m here and all that work leading up to now is on the line. It’s my job to step up to the challenge, make something spectacular happen and drive without fear.”

Three races remain before the eight-driver playoff field is set in the Gander Outdoors NASCAR Truck Series and Burton is fifth in the series standings but on the outside looking into the playoff field.

In need of a win

Five drivers have posted wins so far this year, which leaves just three spots available by points. At the moment, Burton is fourth-highest in points.

It’s possible he could earn his way in by points over the next three races, but the sure-fire way to gain a playoff berth is to win between now and the regular season finale at Michigan.

“We’re battling, man. It’s fun. It’s what this sport is about,” Burton said. “You can get really way too stressed out about it, which I’m guilty of at times. This is my livelihood – something I want to do as a career for the rest of my life. So, you kind of have to enjoy the moment.

“It’s sort of like a basketball team trying to hit a buzzer-beater shot to win a game. You got to want the ball and you have to want to take the opportunity by the horns and get it.”

Burton and his 19-year-old teammate, Todd Gilliland, have raised the ire of their team owner, Kyle Busch, this season because he believes both are capable of winning races at KBM, yet neither has to this point.

“We feel like we can win any weekend and I feel like some people don’t necessarily believe that so we have to go out and prove them wrong.”

Pocono Raceway – where Kyle Busch Motorsports has won the last four Truck races – is certainly a track on which Burton should have an advantage.

“My mindset coming in is to win – to attack and be aggressive all day,” Burton said of Saturday’s Gander RV 150. “I think we have a good truck – it’s fast. We were on top of the board in the first practice. It’s got raw speed in it, which is good.

“This is race is about who can fall off the least and stop the bleeding at a certain point and just keep running those lap times over and over. Hopefully, we can do that and come out of here with a win.”

Pocono is the first superspeedway race Burton was eligible to compete on at 17 years old and he won in his first ARCA start at the track last July.

The one thing of which Burton is certain of this weekend is that driving for KBM’s No. 18 Toyota team, he will have the tools to win.

“This playoff system can frustrating as all get-out when it doesn’t go your way and some guy wins that you feel you out-performed. But then you have to ask yourself, ‘Why didn’t we win?’ ” he said.

“We have our destiny in our hands. I feel like we can beat any of the guys locked in (the playoffs) on any given week. I love the challenge. And even if it doesn’t go my way, I’ll still rebound from it.

“I’ve had bad years in racing, way worse than this year. It’s just how it goes.”

Christian Eckes back in ARCA title hunt with Pocono win