Last lap move give Busch the win over Peters.

Kyle Busch was able to make a move to the top groove of Daytona International Speedway on the final lap of the NextEra Energy Resources 250 NASCAR Camping World Truck Series race on Friday night to get his No. 51 Kyle Busch Motorsports Toyota by the No. 17 Red Horse Racing Toyota to claim the win by a 0.017 seconds over runner-up Peters.

"I didn't think I was going to be able to make that move," Busch said of his pass for the win.

It was Busch's first Truck Series win at Daytona, but the eighth-straight for Toyota. The No. 98 ThorSport Racing Toyota of Johnny Sauter finished third to give Toyota the one-two-three finish.

"I just wan't in the position to make a move there," Sauter, last year's Daytona winner, said. "If you can't win it, you want to finish it, and that's a solid start to our season." 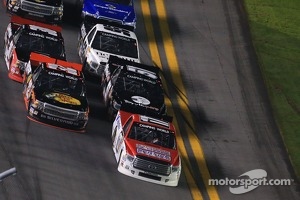 Ben Kennedy, the great-grandson of of NASCAR founder Bill France Sr., started the No. 31 Turner Scott Motorsports Chevrolet on the pole after ran cancelled qualifying and delayed the start of the race for about an hour. He remained up front until he had trouble getting off of pit road during a lap-51 caution flag. Kennedy wound up restarting in 10th while Busch and the No. 30 Turner Scott Motorsports Chevrolet of Hornaday restarted the race in the top-two spots.

Busch and Hornaday continued to hold down the first two positions in the running order until Peters was able to lead the outside line and pull up beside Busch with about 43 laps remaining in the 100-lap event. Busch and Peters then ran side-by-side, with Busch leading the inside line and Peters pulling the outside lane of traffic. Peters was able to get out front for the lead and moved to the bottom, in front of Busch, with 37 laps to go.

Peters gave up the lead when the yellow flag waved again for a multi-truck wreck on lap 74 that involved the No. 58 BRG Motorsports Toyota of Parker Kligerman, the No. 92 Ricky Benton Racing Ford of Ross Chastain, the No. 35 Win-Tron Racing Toyota of Mason Mingus, and the No. 54 Kyle Busch Motorsports Toyota of Darrell Wallace Jr., among others. While most trucks headed down pit road for a splash of fuel, Peters gave up the lead by staying on pit road long enough to get a full tank.

Busch restarted with the lead, with the No. 32 Turner Scott Motorsports Chevrolet of Ryan Truex alongside in second. Sauter moved from third to second on the restart, though, as Truex slid back outsdie the top-10. With Busch and Sauter running one-two, Peters, once again, made his way toward the front on the outside.

"I think we were the only truck that could make the outside work tonight," Peters said.

With five laps to go, Peters was back beside Busch up front and took the lead with four laps remaining. When Peters moved down in front of Busch, Truex assumed the lead position of the outside line, but he was unable to get up front to take the overall race lead. Taking a cue from Peters, Busch moved to the top on the final lap and was able to get a nose in front of Peters as the checkered flag waved. "Kyle caught the right push at the right time from Johnny," Peters said.

Truex finished fourth, and Hornaday rounded out the top-five. The No. 29 Brad Keselowski Racing Ford of Ryan Blaney was sixth, the No. 13 ThorSport Racing Toyota of Jeb Burton seventh, and the No. 8 NEMCO Motorsports Toyota of Joe Nemechek was eighth. Jimmy Weller spun his No. 08 SS Green Light Racing Chevrolet across the start/finish line to finish ninth, and the No. 77 Red Horse Racing Toyota of German Quiroga finished 10th.

Eighth straight NCWTS win for a Tundra driver at Daytona