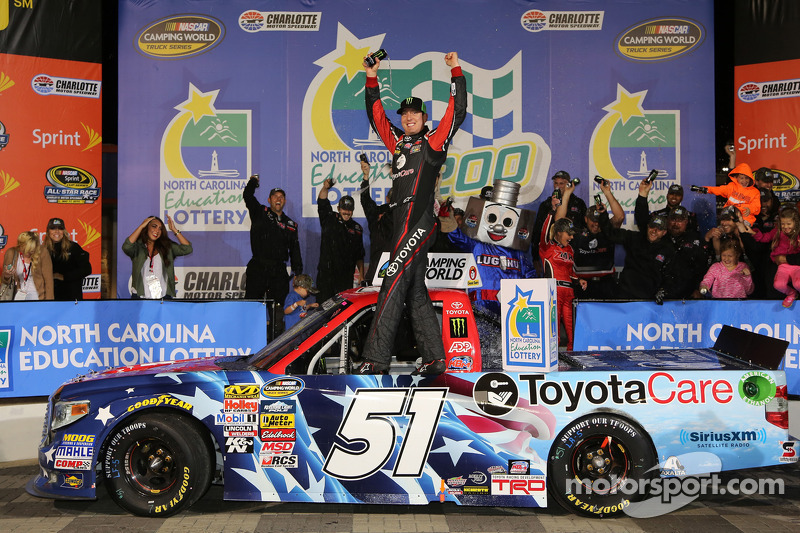 Kyle Busch dominated the CWTS race at Charlotte Friday night - Amanda Vincent has a recap of all the action.

Kyle Busch dominated the North Carolina Education Lottery 300 NASCAR Camping World Truck Series race at Charlotte on Friday, leading almost the entire 134-lap race with his No. 51 Kyle Busch Motorsports Toyota en route to the victory. It was his 38th career Truck Series win, his sixth at Charlotte, and his third in as many starts this year.

"We worked really hard over the winter on this stuff," Busch's crew chief Eric Phillips said. "We unloaded and we had speed. We lacked that last year."

Busch started on the pole and ran up front with the exception of a few laps under a caution with just under 50 laps to go when the No. 8 SWM-NEMCO Racing Toyota of Joe Nemechek stayed out as everyone else headed down pit road. Busch retook the lead immediately after the restart.

"My restarts were really good," Busch said. "Just timit it right and watching what the guys around me are doing."

The race was attrition-filled with the yellow flag waving nine times, the last of those cautions coming on the final lap for a crash between the No. 13 ThorSport Racing Toyota of Jeb Burton and the No. 77 Red Horse Racing Toyota of German Quiroga as the two tried to go three wide with the lap truck of Norm Benning.

The yellow flag waved only twice in the first half of the race before being utilized often in the second half. Late race cautions saw both the No. 29 Brad Keselowski Racing Ford of Ryan Blaney and the No. 30 Turner Scott Motorsports Chevrolet getting airborne in separate incidents.

Hornaday ran second to Busch for much of the first half of the race, before Crafton, who ran near the front throughout the race, moved up to second on a restart following a lap 93 caution. Crafton followed in Busch's tire tracks for the remainder of the race.

"We made it (the truck) quite a bit better for the short run," Crafton said. "If we had one more adjustment, I don't think he (Busch) would've drove away from us."

Timothy Peters finished fourth in the No. 17 Red Horse Racing Chevrolet, and John Wes Townley was fifth in the No. 5 Wauters Motorsports Toyota - his first-career top-five. Townley was blamed by Blaney for causing the seventh caution of the race on lap 104, when he forced Blaney into the grass, causing a major accident between he and Brian Ickler.

"Unfortunately, I would've gave him (Blaney) the line if I'd known he was there," Townley said. Blaney used an expletive when describing the incident to Fox Sports.

Jake Crum and Ryan Ellis also got into it after contact sent them both spinning. Crum later retaliated, sending Elliss hard into the backstretch wall and earning him a trip to the NASCAR hauler.

Crafton, Hornaday out to dethrone Busch at CMS