Opportunities await in first round of NASCAR Truck playoffs 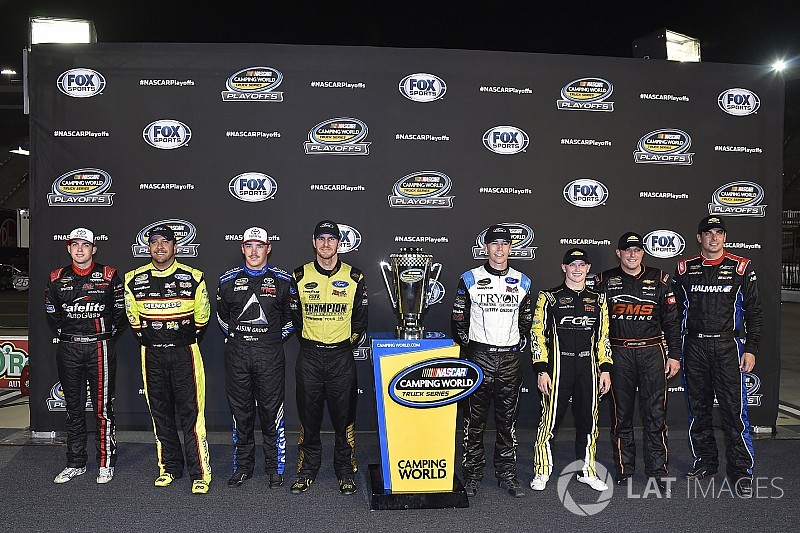 A quick look at the NASCAR Camping World Truck Series playoff schedule and its first round of three races may seem more about survival.

After all, the playoffs open Sunday on the series’ only road course – Canadian Tire Motorsports Park – followed by a visit to Las Vegas Motor Speedway and then a cut-off race at often-unpredictable Talladega (Ala.) Superspeedway.

However intimidating the first round may seem, it should also be looked on as an opportunity for anyone not named Johnny Sauter or Brett Moffitt.

Together, Sauter and Moffitt – the first and second seeds, respectively, in the playoffs – have won nine of the season’s first 16 races.

They have also collected the vast majority of their wins on the series’ larger speedways, the same type which dominate the remainder of the playoff schedule.

In fact, Sauter has repeatedly mentioned this week that he was not a great road racer and Moffitt said Tuesday that he has never even competed in an event at Talladega.

In other words, if this year’s Truck Series playoffs is going to be something other than the Sauter-Moffitt show, somebody needs to rise to the occasion in Round 1 because they may not have the opportunity later.

“I feel like by a third of the way through the season (Sauter and Moffitt) were probably going to make it to Homestead and those would be the guys we would be racing to win the championship,” said driver Noah Gragson.

“Rudy (Fugle, crew chief) has really been trying to preach that to me lately – everything is very situational in this first round. Obviously, we’re going to try to win this Sunday but stage points – they are even more valuable now – they make shake up the strategy of the race.

“I can see some guys missing out on an opportunity for the win by chasing stage points and playoff points, and some guys may focus only on winning. I think there will be a lot of different objectives this weekend.”

Gragson has one win this season, at Kansas Speedway, and his Kyle Busch Motorsports team is known for having speed on the series’ bigger tracks.

The first round also offers hope for Grant Enfinger.

Enfinger’s sole series win came at Talladega in 2016 and finished sixth in this year’s season opener at Daytona.

“With these races, however, the chances of something bad happening are higher in Canada and Talladega than anywhere else,” he said. “Now, anything can happen at any race, it’s just that at Canada or Talladega something can happen to you even if you’re just minding your own business.

“Having two of those types of races in the first round is stressing a lot of these guys out but I think we just need to continue doing what we’ve done – optimize our stage points and get solid finishes.

“If we do that, I feel really good about Round 2 – Martinsville, Texas and Phoenix. We’ve had good speed in those races this season.”

Sauter and Moffitt may be all-but guaranteed a spot in the Championship 4 at Homestead, but who will join them in the other two spots and how competitive they will be once there could well be determined in this intriguing first round.

Dalton Sargeant out at GMS Racing