While his hometown may have snow this time of the season, Jeg Coughlin has a smile that could warm up the coldest wintry weather in Ohio.

Had you been at the 2012 NHRA Winternationals last February on the Auto Club Raceway at Pomona dragstrip, you might have envisioned Jeg Coughlin being a force in the race for the Full Throttle Drag Racing Series Pro Stock championship.

The four-time Pro Stock champion (2000, 2002, 2009, 2008) came out of the box with a vengeance after a year on the professional sidelines – oftentimes the grind gets too much for anyone other than John Force to bear – utilizing his own team, his own JNR engine shop and a new Dodge Avenger for the revitalized effort.

But alas that wasn’t the case for this JEGS.com team. They struggled after making it to the finals for the first race and didn’t really start showing muscle until just before the Countdown to the Championship six-race playoffs that ended the season began after Indianapolis. 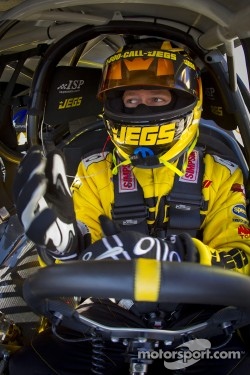 Although Coughlin’s yellow JEGS.com Avenger made it into the playoffs and started to show some signs of promise, he was nowhere near the stature of 2012 champion Allen Johnson, second-year pro Vincent Nobile or veteran V Gaines, all of whom drove Dodge-powered Pro Stock racecars this year.

By the time the Pro Stock contingent reached the end of the road at the World Finals at Pomona in mid-November, Coughlin was ready to make some changes to his program. He would finish in ninth place with 2271 points, a full 485 points behind Johnson’s championship run.

It was evident Coughlin was hungry for another title and ready to do whatever it took to get more Wally trophies awarded for race wins. In a class like Pro Stock, arguably THE most competitive in the NHRA professional ranks, it’s vital to stay a step in front of the competition; catching up just doesn’t cut it.

Before he began running his own campaign this year, Coughlin had been aligned with Victor Cagnazzi’s Cagnazzi Racing, which ran his more recent efforts. So the Ohioan wasn’t averse to having a teammate or even a technical partnership.

And so it came to pass that he and Johnson & Johnson Racing (J&J) announced they’d join forces for the 2013 season and beyond – just one day after the 2012 campaign was completed – making Coughlin a Mopar-backed teammate to newly minted titleholder Allen Johnson.

“Allen and I were teammates this year under the Mopar umbrella, so it was a very natural progression to become actual teammates moving forward,” Coughlin explained. “Allen and his (engine builder) father Roy really put on a show this year and proved to everyone that Mopar can compete with and triumph against the best of the best in one of the toughest categories in racing. I’m excited about joining them.” 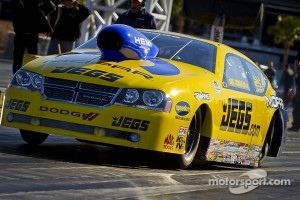 Still this wasn’t an easy decision as Coughlin shuttered his JNR Racing in-house engine shop. “We partnered with some very, very good people and we worked hard, but we weren’t able to yield what we wanted.” The Johnson clan and Coughlin began talking in the latter stages of the season and the program began to take shape.

Coughlin envisions an open garage/pit area and the ability to bring more championships to the Mopar brand. In addition to these new teammates, technical partner Vincent Nobile continues to run with Roy Johnson’s and J&J Racing’s exceptional power for the 2013 season.

Force after 150th win: “The monkey taught me so much”