Force aims to extend his own record in the West 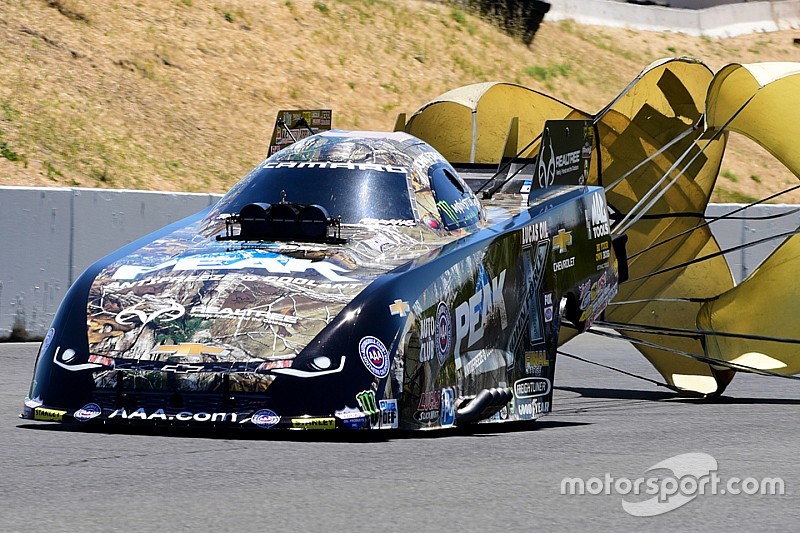 Only one Funny Car driver has ever completed a sweep of NHRA’s Western Swing and that was John Force in 1994. Now he has the opportunity to repeat, as Anne Proffit explains.

This coming weekend is the final of three consecutive races that comprise the NHRA’s Western Swing in the Mello Yello Drag Racing Series. The Swing goes from the altitude of Denver to near sea-level at Sonoma and then north to Kent, Washington, near Seattle, where cool temps make tuners eyes gleam with thoughts of national records.

John Force, the 16-time NHRA Funny Car titleholder, won at Denver and Sonoma and would like nothing more than his second sweep of the Western Swing. In 1994, he became the first – and so far, only – Funny Car driver to win all three Swing competitions. 22 years on, he gets the chance to repeat.

“I am going to do like last time; I’m not even going to think about it,” said the 67-year-old after claiming back-to-back victories for the first time since 2013, earning his 145th Wally trophy in a career that appears destined to last his entire life.

Force’s Funny Car team has been in rebuild mode since the end of 2014. He and company president/son-in-law Robert Hight, together with daughter Courtney Force lost partner Ford and moved to Chevrolet. Longtime sponsor Castrol said goodbye; Force adopted Peak, Realtree and Lucas Oil as primary partners. Whenever there’s a roadblock in front of John Force Racing, he and his “brain trust” work their butts off to overcome it.

In addition to a new car and new partners, John Force had a new tuner/crew chief at the start of the 2015 season. Hiring from within, Force chose fellow Californian Jon Shaffer.

Says Force: “It amazes me how calm and cool he is at 25 years old, how he runs a racecar, how he talks to me, and most importantly how he understands me.”

Understanding John Force can be a challenge - the man is a whirlwind of activity and talk. But he’s learning new things from Shaffer, Nick Casertano and the very young team they’ve put together and built over the past year and a half.

“The road is tough on these kids and I have a young team,” Force remarks. “We have seen mistakes like any team out here. But we have addressed it. We will be ready for Seattle with them.”

At Denver, John defeated his daughter Courtney to win the race; in Sonoma he vanquished current points leader Ron Capps in the final round.

In terms of career victories, Force holds a 145-48 victory lead over Capps but in their final round match-ups, the edge is slim – just 10-8 in Force’s favor.

Force remarked: “Capps is a special guy and I want to beat him. I might have beat him today, but he is a mile ahead of us in the points standings.

“I gave him a big hug at the top end of the track. I think Schumacher [Capps’ team owner Don Schumacher]) got a restraining order on me and I can’t get 10 feet from him after kissing him at Denver!”

When he wins, it appears that John Force is a young man again, his excitement in the possibility of winning the Western Swing is quite palpable. He reported that his former crew chief Austin Coil told him right after his Sonoma win that he was also driving like he did 20 years ago, although Force acknowledged that wasn’t always a good thing.

“Now I’ve got a young generation, Mike Neff (tuner for Hight) teaching me things,” he said. “I’m so bullheaded when I drive that I was hurting myself there for a while with that new Chevy [Camaro body].”

Force had already broken his Peak Chevy Camaro body with an accident and, even after fixing it the car hasn’t run right. So at Sonoma, John Force changed to the body he’d used to win Denver, getting permission from Peak to use it again. The result? Another victory.

Force will continue with his Realtree body in Seattle, hoping to win the Swing and rates his chances as “as good as anybody else’s” to take the Wally at Pacific Raceways.

“I like Seattle: good air, good race track. The fans are great so let’s see if we can go give them a show. That is what we are trying to do. I want to win championships.

“I have my work cut out for me to grow the sport and the opportunity to take advantage of it.”