Stefan Rzadzinski captures victory in Round 10 at CTMP 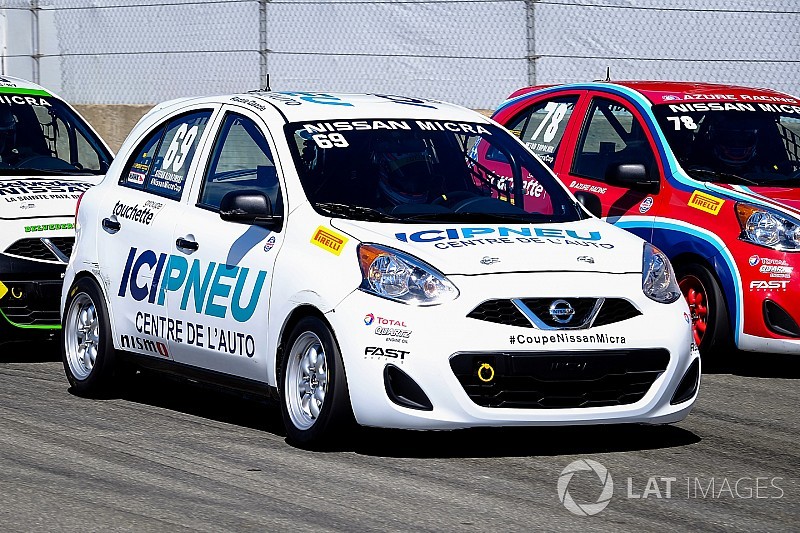 However, the big news of the day concerned reigning series’ champion, Xavier Coupal, who was prevented for participating in the race following yesterday’s accident.

At the start of Saturday’s race, Coupal’s No. 1 Nissan touched the No. 96 car of fellow front row starter Stefan Gauthier. Coupal’s car smashed backwards into the concrete wall. Once returned in the paddock, the car was declared a write-off, forcing Coupal to miss Sunday’s race.

At the green, King jumped into the lead ahead of Lazare and Gauthier. Before the end of Lap 1, Gauthier moved ahead of Lazare for second spot. One lap later, the order was King, Gauthier, Lazare, Bédard, Keishi Ayuka and Valérie Limoges.

Bédard passed Lazare under braking for Corner 5A of Lap 4 to take fourth place. Out in front, the two Sorel-Tracy teammates tried to work together to pull away from the third placed Isabelle, but couldn’t extend their lead. It became a four-car train when Bédard joined them.

On Lap 6, Bédard and Isabelle negotiated Corner 1 side-by-side, but Isabelle’s Micra went sideways and out of control. It hit the outside wall and bounced back inside. The Safety Car came into action to let the crew workers clear the stricken car of Isabelle who was uninjured.

The race was restarted on Lap 10. At the end of that lap, Bédard motored ahead of Gauthier to take second while Limoges also mounted a challenge on Gauthier. Corners later, Bédard took the lead from King. King quickly regained first place from Bédard while Stefan Rzadzinski - who started 10th - made it to second, and then moved up to first. King was second, followed by Bédard and Normand Boyer.

With one lap to go, Rzadzinski enjoyed a one-second lead over Bédard and King. It was really exciting last lap with amazing drafting along the entire Andretti straight.

Rzadzinski took the chequered flag just a few feet in front of Bédard and King. Lazare arrive home in fourth place. Action raged behind them.

Between Corner 9 and 10, Boyer and Ayukai ran side-by-side, but in Corner 10, Ayukai’s Micra was bumped from behind, which ended his race a few hundred meters from the finish. Boyer was given a penalty for avoidable contact, and was pushed down to seventh. Limoges was classified fifth ahead of Gauthier, Boyer, Frédéric Bernier, Jake Exton and Marc-Antoine Cardin.

Finale of the 2017 Nissan Micra Cup at Mont-Tremblant

Kevin King wins Race 2 of the Victoria Speedfest at CTMP