The youngster thereby emulated the performances of fellow Team USA winners Conor Daly in 2008 and Connor De Phillippi in 2009. It was also the sixth victory for Cliff Dempsey Racing. 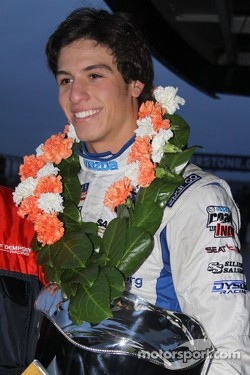 Yesterday’s cold but sunny conditions gave way to wintry driving rain this morning which caused a lengthy delay to the proceedings.

The treacherous track played somewhat into the hands of Nunez and Mitchell, who had conducted the bulk of their testing this week on the Silverstone National circuit in wet or damp conditions.

The two Americans were drawn together in the second of two Semi Final races which were shortened to eight laps from the originally scheduled 12 laps.

After lining up eighth and 10th on the 36-car grid, Nunez, in particular, soon began to scythe his way toward the front. One particularly bold maneuver on Lap 3 saw him vault past two cars on the outside line under braking for Brooklands.

Nunez proceeded to set the second fastest lap of the race – a little over one tenth of a second slower than runaway winner Ivor McCullough – as he fought up to fourth place by the finish in slippery conditions. Mitchell also drove a good race to finish in eighth.

McCullough’s winning time was slightly faster than the pace set by Peter Dempsey (son of Cliff Dempsey) in Semi Final 1, thus securing him the covered pole position for the Grand Final. Nunez and Mitchell lined up seventh and 15th respectively.

The track remained extremely wet for the Grand Final, but Nunez again quickly found his groove. He raced to third place by Lap 3 and immediately began to close in on an intense battle for the lead between Dempsey and Foster – both of whom were seeking to become the event’s first-ever four-time winner.

By Lap 7, the three leaders were together. Perhaps inevitably, after exchanging positions several times in one of the most exciting Grand Finals on record, Foster and Dempsey tangled together at Beckett’s corner on Lap 10 out of 12.

Nunez was able to pick his way past into the lead but he was far from home free.

After an uncharacteristically leisurely start, McCullough had broken clear of Australian John Martin following another close tussle and was intent upon becoming the first man ever to sweep both the Formula Ford Festival and the Walter Hayes Trophy in the same year.

On Lap 11, McCullough dived through on the inside of Nunez under braking for Brooklands to wrest away the lead.

Undaunted, Nunez tucked in behind his rival, then took advantage of a slight slip by McCullough at Copse Corner and regained the advantage at Beckett’s.

Martin also remained in the thick of the action, passing McCullough for second as Nunez sped clear for the win. The American set fastest race lap for good measure.

“I’m so in shock I can’t believe it,” said an elated Nunez. “On the last lap McCullough got around me and I got a really good run coming out of the first corner.

I just stuffed it in going into Turn Three. I made it stick but then that slowed everyone else down and P3 (Martin) was able to get around him and spread the gap a little bit.

“I thought I could win it when I started to catch the first two, and when they crashed I thought, OK, this was meant to be, this was definitely meant to be. I still don’t have the words to explain it!”

Mitchell was overshadowed this afternoon but still drove a fine race from 15th to earn a top-10 finish.

“I’m so pleased for Tristan,” said Mitchell. “He really did an amazing job and I’m so proud to have been here to play my part.

“The whole Scholarship has been phenomenal. I need to thank everyone who has made it possible. It’s been awesome. The best two weeks of my life. I’ve learned more than I could have ever imagined.

I’m sure the rest of my career I’ll remember this and I’m super-excited to take everything I’ve learned back to America.”