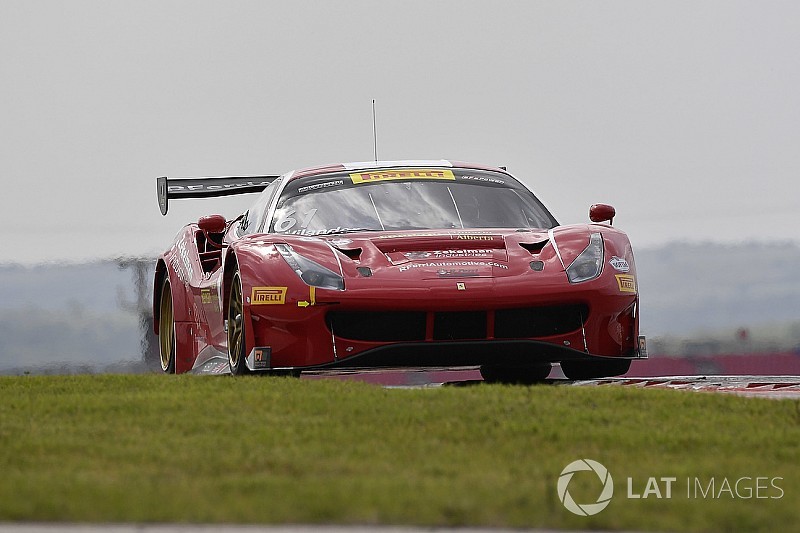 Once Miguel Molina passed Jeff Segal for the lead on Lap 2 of the SprintX event, he and Toni Vilander's R. Ferri Motorsport Ferrari had it all under control to complete a sweep of the weekend’s GT SprintX races at COTA.

The Jeff Segal (TR3 Racing) and Miguel Molina (R.Ferri Motorsports) Ferrari 488s led from the start, as Sean Heckert’s Lone Star Racing Mercedes AMG zoomed up into third and then had to hold off Wolf Henzler’s Pfaff Porsche 911, and Maxime Soulet and Andy Soucek in the two K-PAX Bentley Continentals.

At the start of Lap 2, Molina was into the lead and Segal was further demoted by Heckert, while on Lap 3 Soulet tumbled to eighth, allowing Soucek, Fabian Schiller and TruSpeed Autosport’s Audi R8 of Ryan Dalziel ahead.

Dalziel’s efforts to get past Schiller in what was Dalziel’s CRP Mercedes in 2017, went awry just enough to allow Soulet back ahead to zone in on the rear of the Benz, and pass for sixth place into Turn 19. Dalziel’s Audi slipped past the Mercedes for seventh on Lap 9.

As pitlane opened, Heckert dived for the pitlane right away to hand over to Mike Skeen, as did Henzler to pass off to Scott Hargrove, and Schiller to hand over to Daniel Morad.

Soucek passed the #9 Bentley to Alvaro Parente but Molina and Segal kept the Ferraris out on track, as did Soulet in the other Bentley.

Finally on Lap 15 with a 6sec lead on Segal, Molina pitted to hand over to Toni Vilander and Dalziel handed over to Parker Chase. The following lap, it was Segal’s turn to relinquish his seat to Wei Lu.

Morad passed Chase into Turn 1, and the two Bentleys of Rodrigo Baptista and Parente were soon crawling all over the Audi R8 too. They passed – the latter with difficulty and a bit of paint exchange – and so post pitstops, Vilander led Skeen by 1.5sec, with Hargrove right under the Mercedes’ rear bumper, while Lu led Morad, the Bentleys and Chase’s Audi.

Hargrove’s Porsche had the traction through the twisty sections of the track, while Skeen ‘s Mercedes could break away on the straights. Their hard side-by-side Lap 20 battle let Vilander stretch his lead to 3.6sec with 16mins to go, but Lu – although impressively fast – couldn’t close up and instead would soon have to protect his fourth place from the marauding Morad’s Mercedes and Baptista in the better of the Bentleys.

In the final 12 minutes, the top three stabilized, with Vilander holding a steady five-plus second lead on Skeen who in turn seemed to have knocked the fight out of Hargrove, who’d fallen 2.5sec back. Behind, Morad’s attack on Lu was somewhat thrown off by his need to defend from Baptista, who was now a full five seconds ahead of his teammate Parente. Meanwhile Michael Christensen’s 911 had knocked Chase down to eighth.

Vilander eased up over the closing laps, winning by 2.521sec to give himself, Molina and R. Ferri Motorsports an impressive pair of wins this weekend. Skeen beat Hargrove by 1.645sec, with Lu clinging on to fourth – and Pro/Am victory – despite a hard final-lap challenge by Morad. Baptista’s Bentley was sixth, with fastest lap of the race, 6.5sec ahead of Parente.