Pruett rusty no more, wins St. Pete. ST. PETERSBURG, Fla. â€¹ Scott Pruett proved he hadn't lost anything in the seven years he's been away from the Trans-Am Series for the BFGoodrich Tires Cup by becoming the first repeat winner of the Grand Prix ...

ST. PETERSBURG, Fla. ‹ Scott Pruett proved he hadn't lost anything in the seven years he's been away from the Trans-Am Series for the BFGoodrich Tires Cup by becoming the first repeat winner of the Grand Prix of St. Petersburg Sunday at the temporary combined street and airport circuit in downtown St. Petersburg. 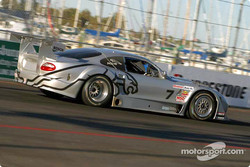 Pruett won the 1987 edition of the this race, run on another street circuit around Tropicana Field, en route to one of his two Trans-Am championships. Driving the No. 7 The Jaguar R Performance Jaguar XKR, Pruett simply dominated the race, winning the pole, leading the most laps, setting the fastest race lap and beating Boris Said, in the No. 33 ACS Express Menards Ford Mustang, by 1.296 seconds. Johnny Miller, driving the No. 64 Eaton Cutler-Hammer AutomationDirect Jaguar was third, ahead of Paul Gentilozzi, in the No. 3 The Jaguar R Performance Jaguar XKR and Stu Hayner, No. 2 Trenton Forging Chevrolet Corvette.

Pruett won the BFGoodrich Tires Take Control Award for leading the most laps and the newly announced $2,000 Flowmaster American Thunder Challenge for his dominant run.

"I didn't have to worry about Boris," said Pruett, who returned to the Trans-Am Series this year after his last full season in 1994. "I saw him coming and we wanted to keep a good pace. This Jaguar just didn't miss a beat all day long. When I wanted a little bit more, it had it in it. It's a terrific car.

"This is just a great way to come back," he added. "(Team owner) Paul Gentilozzi and all the Rocketsports team just gave me a great drive. I said I was a rusty nail on Friday. I guess maybe I'm just a little bit tarnished, but not rusty any more."

Said drove from dead last on the grid after his qualifying time was nullified for a rule infraction found in post-qualifying inspection, and put on a driving clinic on the fast 1.806-mile circuit.

Said said he enjoyed his drive through the field.

"This is the best street course I've ever been on," said Said. "The crowd was great. Scott is just a really great driver. I don't know if we could have caught him in the end." 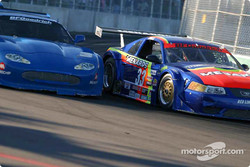 Miller, too, had his own fight to the front, after losing several positions on a mid-race restart. "I think we were both pedaling really hard," said Miller. "On the first restart, the tires just got covered in sand and I lost a couple positions, so we just had to go for it. It was just an absolute blast there at the end."

Pruett led from the pole, but lost the lead briefly to Gentilozzi on lap 14, only to take it back for good on the following lap.

From there, Pruett ran unchallenged to the checkered flag.

The race ran in a one hour, 16 minutes and six seconds at an average speed of 78.314 miles per hour.

The caution flag waved twice: once when Bill Bentley (No. 46 Bentley Architects & Engineers Chevrolet Camaro) hit the wall and the second time for a newly Series-mandated competition caution.

With the victory, Pruett takes the lead in the championship with 35 points. Said, Gentilozzi and Miller, who earned bonus points on the inaugural Fast Five Lap, complete second through fourth in the points chase, ahead of Hayner.