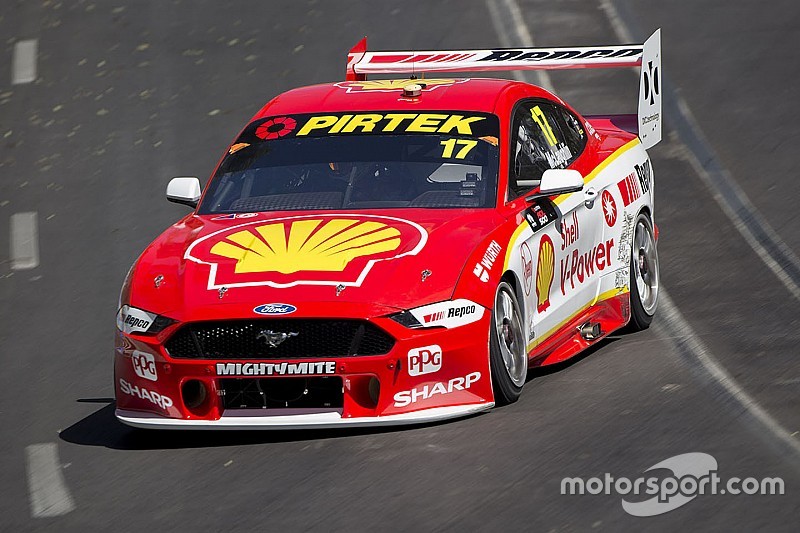 Supercars champion Scott McLaughlin braved searing temperatures to score a historic debut win for the Ford Mustang on the streets of Adelaide.

It was effectively a lights-to-flag win for the DJR Team Penske driver, who finished up with a 12.9s advantage over Triple Eight pair Jamie Whincup and Shane van Gisbergen.

The win was the first for a Mustang in the Australian Touring Car Championship in 46 years, the last coming at the hands of Allan Moffat.

“That one’s for you Ford fans, first weekend for the Mustang,” he said.

“We’re here, we’re here to party and we’re going to have a good time.

“It was really tough, [but] cooling and all that stuff was really good for us and I just brought it home.

McLaughlin sprung into the lead at the start from the second row, his cause helped greatly by teammate and pole sitter Fabian Coulthard jumping the start and then baulking immediately.

Coulthard held on to second, however was swiftly slapped with a 10-second penalty for his premature launch.

The Red Bull Holdens slotted into third and fourth, Shane van Gisbergen jumping Jamie Whincup through Turn 3 at the start. They switched back at the end of Lap 5, though, Whincup easing past the Kiwi at the final corner.

On Lap 10 Coulthard took his first stop, and the 10-second penalty with it, which dumped him down to 21st.

McLaughlin steadily built his lead across the first stint, pulling 5s on Whincup and 8s on van Gisbergen.

The two Triple Eight drivers were next to stop, van Gisbergen coming in on Lap 18 before Whincup followed two laps later.

Cam Waters, who had run in the top six from the start, pitted on Lap 20 as well, however it wasn't a regular stop. With his cool suit having frozen early in the race, and the ambient temperature over 40 degrees celsius, he had to get out of the car for it to be fixed under the category's duty of care regulations.

He wasn't happen about it either, telling the broadcast crew that he was fine to continue. Instead he had to wait until he was 14 laps down, and the plumbing around the suit was repaired, before he could get back on track.

McLaughlin made his first stop on Lap 22, emerging with an effective lead of 4s over Whincup.

The re-profiled Turn 7 claimed its first victims on Lap 26, started by Lee Holdsworth – who earlier in the weekend predicted chaos at that exact part of the track – firing into the wall.

As his Tickford Mustang bounced back out Scott Pye was left with nowhere to go. Both got going again, but repairs meant Holdsworth lost six laps, while Pye never re-emerged once in the garage.

As the race reached its halfway point McLaughlin shifted his lead over Whincup to 7s, with van Gisbergen a further 4s behind – and with mirrors full of Chaz Mostert's Mustang.

On Lap 40 the Tickford driver tried wrangle third spot off van Gisbergen with an ambitious lunge at Turn 9, however all he did was run wide and end up dropping momentarily behind teammate Will Davison.

Van Gisbergen and Mostert pitted together on Lap 42, immediately resuming their battle once back on track. They ran nose to tail for the next eight laps, before Mostert made another mistake, this time locking up on the way into Turn 4 and losing the best part of 10 seconds.

Meanwhile, Whincup pitted from 12s behind McLaughlin on Lap 49, the Penske Ford driver staying out until Lap 51 before finally making his second stop.

He emerged with a 14s advantage, only dropping a second of that lead over the final stint as he cruised to a comfortable win to kick off his title defence

Thanks to Mostert's failed attempt to pass the #97 Holden, it was Will Davison that came home as the next-best Mustang and the top Tickford Ford.

He was only a second behind van Gisbergen by the finish, with Mostert 2.5s back in fifth.

Coulthard came home sixth despite his 10s penalty, ahead of a gaggle of Holdens led by Nick Percat and including Dave Reynolds, Mark Winterbottom, and James Courtney.