After the four-time race winner laid down a 2m08.8009s lap to be fastest of the first seven cars to run against the clock, rain struck Mount Panorama, robbing Jamie Whincup, Mark Winterbottom and Garth Tander from having a shot at taking pole. 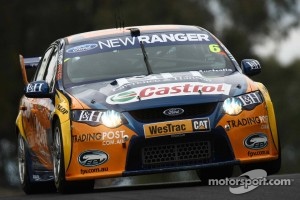 The pole is Murphy’s first in the V8 Supercars Championship since the Gold Coast in 2005, and he and Danish co-driver Allan Simonsen will start on the front row alongside the Trading Post Falcon of Will Davison and Luke Youlden.

The second row of the grid will be reigning champs Craig Lowndes/Mark Skaife and James Courtney/Cameron McConville, with row three to be made up of Shane van Gisbergen/John McIntyre and Steve Owen/Paul Morris.

Whincup, Tander and Winterbottom were all forced to take it steady on a wet road and had to settle for eighth, ninth and tenth in the order.

AFTER taking a surprise pole position for today’s Supercheap Auto Bathurst 1000, Pepsi Max Crew Commodore driver Greg Murphy says he can’t put his finger on why he and Mount Panorama have such a love affair.

As Murphy and his Danish GT ace co-driver Allan Simonsen prepare for today’s 161-lap classic, the four-time winner says he just can’t explain why he finds speed at Bathurst, even in years when he has struggled at other circuits in the V8 Supercars Championship.

“I can’t get enough of it. Last year was the biggest struggle I’ve had up here in a long time.

“But I’m very comfortable in this car.

“There’s not one trick of why I go well here.”

I can’t get enough of it. Last year was the biggest struggle I’ve had up here in a long time.

Much of the pressure in today’s race – which starts at 10.30am AEDT – will fall on Simonsen.

So just who is the 33-year-old Dane that will share the #11 Commodore with Murphy today?

The versatile racer has competed at Bathurst on plenty of occasions (with seven Supercheap Auto Bathurst 1000 starts including a fifth place for TeamVodafone in 2007), and spends his season globetrotting the world driving a Hankook Tyres-backed Ferrari 430 in GT and Le Mans Series racing.

He made his V8 Supercars Championship debut in 2003 at Sandown with Jamie Whincup for Garry Rogers’ team and is likely to be given start duties for the beginning of today’s race.