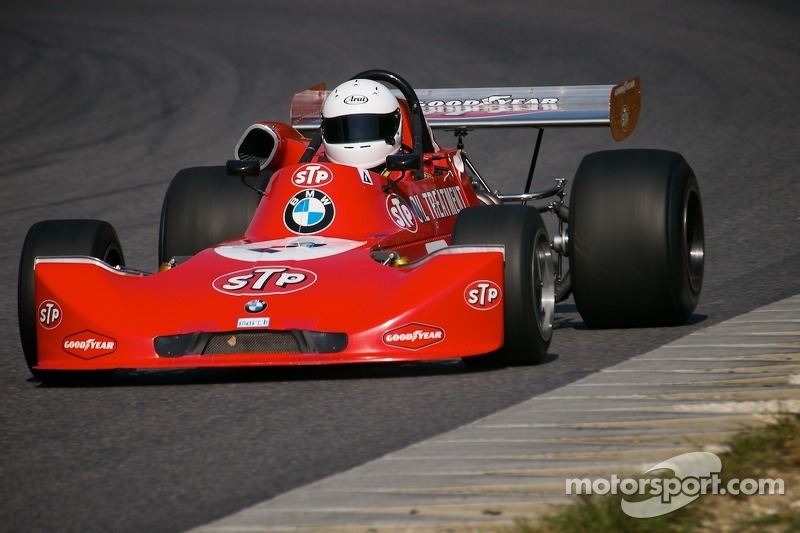 Katz 'exhibits the qualities of a fine gentleman, has high standards, integrity, honesty and demonstrates sportsmanship on the race track.'

- Vintage car racer Howard Katz (in photo, in a 1973 March BMW) was named the third recipient of The Gorsline Cup on June 5 at The Brickyard Vintage Racing Invitational at the Indianapolis Motor Speedway. The Gorsline Cup is presented by Gorsline Company, the premier insurer of high-risk individuals, to a driver who best exhibits the qualities that Gorsline Company and principal John Gorsline have stood for in the four decades they have supported all forms of motorsports: sportsmanship on the track, integrity in car preparation, and excellence in presentation in the paddock.

The award was first presented in 2012 to George Robinson, and last year it was awarded to Toby Bean. Both are vintage and historic racers. "The Gorsline Cup is not necessarily awarded annually," said Gorsline. "If we find a worthy recipient, we will present the award."

Katz, of New York, N.Y., was selected by Gorsline because "he exhibits the qualities of a fine gentleman, has high standards, integrity, honesty and demonstrates sportsmanship on the race track."

An active real estate developer and operator who has "no intention of retiring anytime soon," Katz currently competes in a 1975 Toj BMW 2-liter sports racer, which he is driving at the Brickyard Invitational this weekend, and also owns a 1973 Mach BMW F2 car. Over the years he has raced a 1975 Shadow DN-5 F1 car, and a 1987 Lola Larrousse Cosworth F1. As a pro driver from 1987-2009 he competed in SCCA events and co-drove with Jim Downing in IMSA in a number of Mazda-powered cars, scoring class wins at the Sebring 12-Hour in 1992 and the Daytona 24-Hour in 2001.

"It is an honor to be selected by John and the Gorsline Company for this award," said Katz. "John has been associated with the finest and best individuals in racing for many years and to be selected by him for this is truly amazing."

Said Gorsline, "Howard Katz is one of those people who enjoys the laid-back atmosphere of competing in vintage and historic cars yet is very competitive. He is also a gentleman on the track and in the paddock and represents the best qualities of sportsmanship."