Aston Martin "cannot allow" Porsche to score a third FIA World Endurance Championship victory of the 2019/20 season in Bahrain, according to the British manufacturer's Nicki Thiim.

Porsche has enjoyed a dominant start to the first WEC season run to the winter calendar, with both of its new-generation 911 RSR-19s scoring a win apiece.

That has allowed the Weissach-based marque to build a 22-point lead in the manufacturers’ standings, while its two crews occupy the top of the drivers' table.

While refusing to concede defeat in the title fight just yet, Thiim says Aston Martin must win the bonus-points race in Bahrain to prevent Porsche from running away with the championship.

“We are only halfway through the season,” Thiim told Motorsport.com before qualifying. “The big scorers are coming up now, big points.

"Definitely we need to beat them this weekend, we cannot allow ourselves to let them get the win."

After topping FP2 on Thursday, Aston Martin endured a difficult qualifying session as Porsche locked out the front row of the grid.

Thiim and Sorensen qualified fifth in the #95 Vantage GTE, nine tenths down on the pace-setting #91 Porsche, while the #97 crew of Alex Lynn and Maxime Martin were relegated to the back of the grid after Martin’s lap time was deleted due to exceeding track limits.

Thiim admitted that Porsche was in a “different league” in qualifying, but remains upbeat about Aston’s prospects for the race.

“It’s obviously for Aston not so good with the #97 completely at the back of the grid,” he said. “I had a mistake in my laps, so obviously the average was pulled down there.

“But anyway I think we could have maybe brought it to Ferrari, but Porsche is in a different league. That’s how it is.

“Tomorrow it is a completely different story. Always trying to keep positive, to keep the positive energy. I still think we’ve got a good package for the race, for a long run. So just keep working on it and we’ll see tomorrow.“

Calado insists title battle "not over yet" 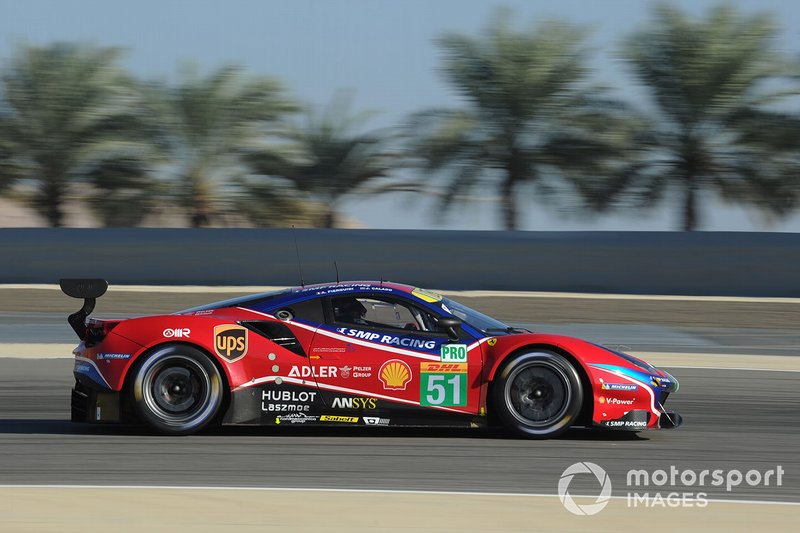 Ferrari is the only GTE Pro manufacturer not to win a race this season after the #51 AF Corse 488 GTE of Alessandro Pier Guidi and James Calado was disqualified from Shanghai last time out - something Ferrari has appealed against.

It was also erroneously handed a drive-through penalty in the Silverstone season-opener, which was rescinded only after Pier Guidi had entered the pits to serve the infraction.

Like Thiim, Calado insists the title battle is ”not over yet” despite Porsche’s early season success, and believes Ferrari should have been “winning by a long way” by now.

“To be honest we have only been very unlucky [this season],” Calado told Motorsport.com. "We had a penalty at Silverstone which was a bit cruel as we took the penalty, so they made a mistake. It cost us a race win.

“Fuji we got unlucky with full course yellow, cost us a podium. Honestly on track we won in China, but unfortunately we got disqualified.

“In terms of result and pace, we are at the front. We would be winning by a long way now if this wasn’t the case. However it’s not.

“Just going to try to make the most of damage that we’ve done and just try and work forward. It’s not over yet but it’s going to be difficult.”

Thiim could return to DTM this year in an Aston Martin