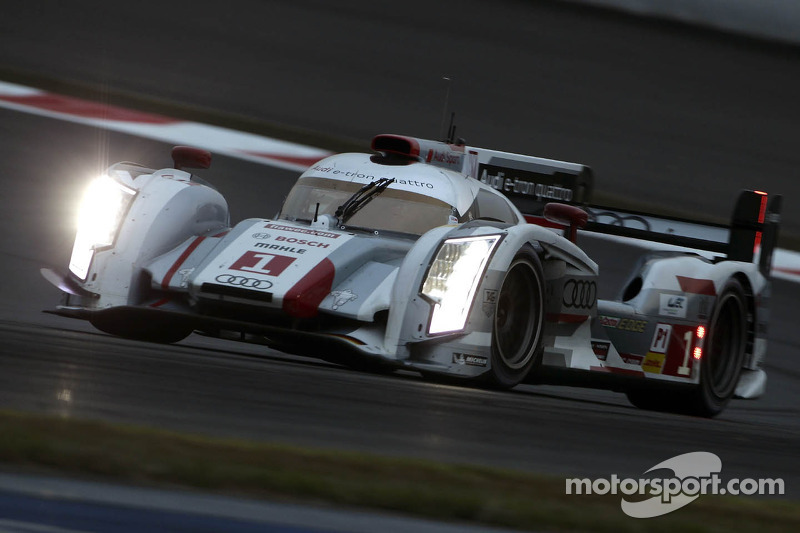 Audi Sport Team Joest’s No.1 Audi R18 e-tron quattro has claimed pole position for tomorrow’s 6 Hours of Fuji, despite the strongest of challenges from Toyota Racing’s No.8 TS030 Hybrid, the two cars being just 0.178 seconds apart at the chequered flag.

Japanese resident and reigning FIA WEC World Champion, André Lotterer, together with Benoît Tréluyer, produced an average time of 1:26.577 over the four best laps for each driver to take pole position. The German-French duo edged out the No. 8 Toyota of Sébastien Buemi and Anthony Davidson by a scant margin, with the Japanese team’s No.7 entry, driven by Kazuki Nakajima and Nicolas Lapierre close only one tenth of a second behind in third place on the grid. Their best average time of 1:26.860 was favourably ahead of the No.2 Audi R18 e-tron quattro (Allan McNish-Loïc Duval), with Lapierre surviving an off-track moment during his time behind the wheel.

The No.12 Rebellion Racing LMP1 Privateer entry continued its unchallenged run in its micro-class with Andrea Belicchi – making his return for the first time since the 24 Hours of Le Mans – and Mathias Beche setting a fastest average time of 1:29.250 in the Lola-Toyota.

The LMP2 class was once again a very closely-fought battle between at least five different challengers, with the No.35 OAK Racing Morgan Nissan coming out on top. Bertrand Baguette and Martin Plowman combined to set the fastest time to claim class pole position, their best average of 1:32.938 being just 0.081 seconds ahead of the No.26 G Drive Racing ORECA 03 Nissan. The Russian car, driven in qualifying by Mike Conway and John Martin bounced back after Conway spun off track early in the session. Third in class was the Japanese Gainer International entry, the No.27 Zytek Z11SN Nissan being driven in qualifying by Katsuyuki Hiranaka and Björn Wirdheim, whose combined average time was 1:33.073. Just 0.19 seconds separated the 2nd to 5th placed LMP2 cars which would indicate that a great battle is ahead in tomorrow’s race.

Toyota Racing in the fight at Fuji