© 2021 Motorsport Network. All rights reserved.
TV Tickets Fashion Giorgio Piola Jobs
Previous / 8Star set for championship showdown in Bahrain Next / 6 Hours of Bahrain, a race like no other for REBELLION Racing
WEC Preview

The goal is clear: „We want to score the title.“

Berlin/Sakhir (rol/ot) The goal is clear: „We want to score the title.“ That is what the German sports car pilot Stefan Mücke said before the season finale of the FIA World Endurance Championship (WEC) this Friday and Saturday (29th/30th of November) with the six hour race of Bahrain. The Aston Martin works driver from Berlin and his British team colleague Darren Turner lead the world championship of the GT drivers and aim for the title in the Vantage GTE V8 in the GTE Pro class on the Formula 1 track in Sakhir (southern of the capital city Manama). The duo took back the lead of the GT drivers, just like Aston Martin in the manufacturer ranking, on the 9th of November at the WEC race in Shanghai (China) with their third season win. 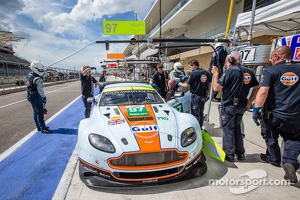 „Now we want to knot onto that in Sakhir“, Stefan Mücke said, who finished second in his class at his race premiere in the heat of the Bahrain desert (about 35°C) last year together with Turner and scored the fastest lap time. „This time it will not be that hot. The track should be good for the vantage, but we will know better after the first training sessions on Thursday“, the Berlin said, who celebrated his 32nd birthday last Friday (22nd of November) – together with his father Peter, who turned 67 one day before, in the family circle.

Stefan Mücke and Darren Turner have a total of 5.5 points advantage to the Italians Gianmaria Bruni and Giancarlo Fisichella, who finished fourth in their Ferrari in Shanghai, before the eighth and last season run at the GT driver’s rankings. A victory in Bahrain would be the safest way to score the title for the German-British duo. They have to finish ahead the Italians anyhow, because if they would win this race, they would get the title. And don’t forget the German Marc Lieb and the Austrian Richard Lietz on third position; they are only 15.5 points behind in their Porsche. „This is certainly going to be a thrilling season finale, where you also need a tiny bit of luck. We will give a hundred percent and try not to make any mistakes, so we can celebrate on the top position of the podium after the six hour race “, Stefan Mücke said.

Why Aston Martin’s new campus is a ‘reverse’ McLaren MTC

The curious case of the F1 pay driver