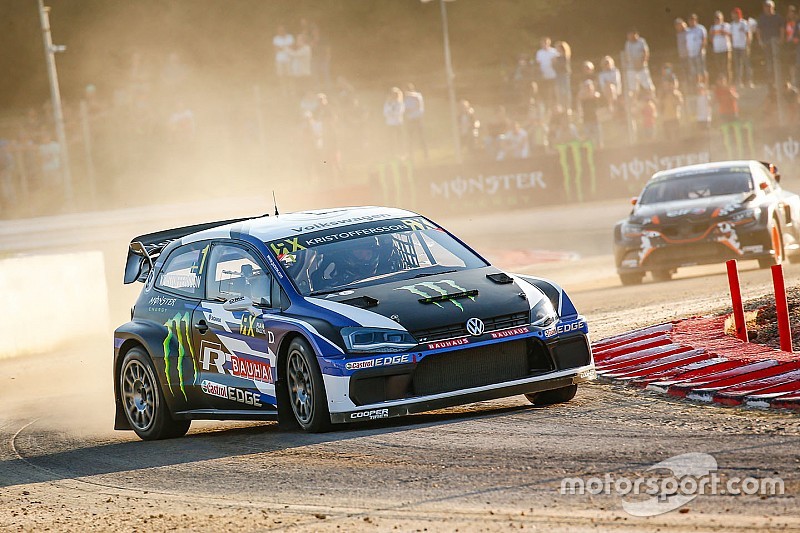 PSRX Volkswagen driver Johan Kristoffersson fought back from a pair of less-than-perfect starts to score his seventh win of the season in the defence of his World Rallycross championship crown.

Kristofferson battled back from making a poor start in Q2 on Saturday afternoon to claim top spot in the intermediate classification, but was beaten to semi-final victory by a fast-starting Mattias Ekstrom.

Starting from the second row of the grid for the final, Kristoffersson ran third on the opening lap, but dropped to fifth when he took his compulsory joker on the second tour.

He climbed to fourth when fellow second-row starter Sebastien Loeb, who had qualified in 12th, took his joker on lap three, then closed the gap to the leading trio of Audi pair Andreas Bakkerud and Ekstrom, and Peugeot driver Timmy Hansen.

Kristofferson then leapfrogged himself into the lead on the final lap as the leaders took their joker together, to claim his third Loheac victory in succession.

Just days after Audi confirmed to Motorsport.com that it will pull out of World RX at the end of the season, the Audi-supported EKS pair of Bakkerud and Ekstrom locked out the front row for the final.

Running one-two for all the final bar the last third of the final lap, Bakkerud slotted into second at the joker merge as Ekstrom dropped to fourth behind PSRX owner and driver Petter Solberg, who had taken his joker at the first opportunity from fifth, having passed Loeb in the opening corners and made the podium.

Loeb’s Peugeot teammate Hansen replicated a move made by his colleague in the semi-finals at the start of the final, cutting inside for the first corner from the outside of the last row, then ran around the outside of Loeb and Solberg in turn two to climb the order.

Hansen's late joker meant he dropped to fifth, emerging just ahead of Loeb at Peugeot’s home event, the six finalists covered by just 1.5 seconds as they crossed the finish line.

British driver Liam Doran starred on his comeback to the series by setting the second fastest time to Kristoffersson in Q3 on Sunday morning in damp and slippery conditions to qualify sixth, but was slowed in the semi-finals and wasn’t able to make a dream final start on his debut for Guerlain Chicherit’s GCK squad.

Solberg was nearly forced to stand down due to illness