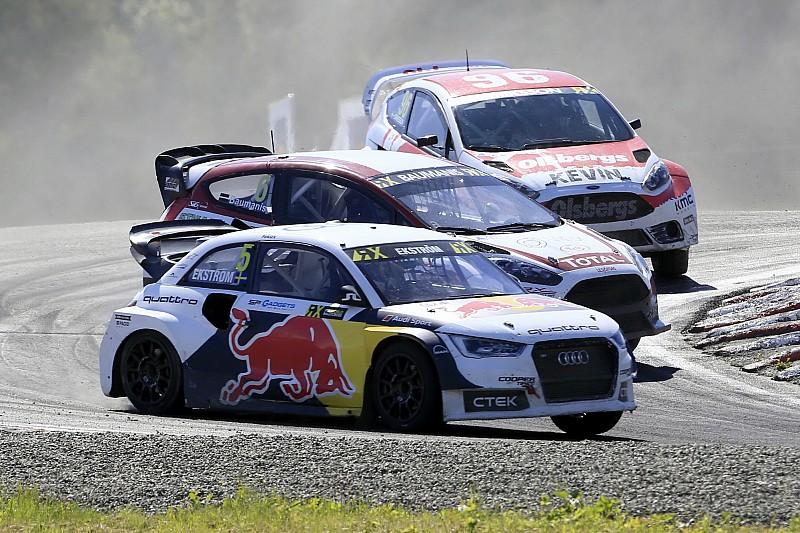 A record-breaking number of cars will compete at the sixth round of the FIA World Rallycross Championship presented by Monster Energy which takes place in Holjes in Sweden this weekend (1-3 July). A total of 111 cars across five different classes have entered Volkswagen Rallycross of Sweden including 47 Supercars (19 World RX entries; 28 Euro RX entries), 21 TouringCars, 25 Super1600 cars and a further 18 entries in the supporting RX Lites.

Set in the small village of Holjes in the heart of the Varmland region, rallycross is well established in Sweden – it was the first of the Nordic countries to embrace rallycross, and remains the only country to have hosted an event in the European/FIA Championship since it began in 1973. Current points leader Mattias Ekstrom is the man to beat in Holjes after winning the event both in 2014 and 2015. If he wins in Sweden this weekend he will become the first driver to win the same World RX round for three consecutive years. Ekstrom commented: “When I look back and remember these events, I still get goose bumps all over my body – the track, the fans, the atmosphere – Holjes really deserves to be called the ‘Magic Weekend’. We are ready to make it three in a row.”

This is the first time this year that I have previous knowledge of a circuit,

Joining Ekstrom on home soil are a further 25 Swedish drivers including Richard Goransson who will compete in the headline Supercar category with Olsbergs MSE alongside the squad’s permanent drivers, Kevin Eriksson and Niclas Gronholm. Reigning Champion Petter Solberg is second in the overall driver standings and will be eager to thwart Ekstrom’s podium charge in order to move ahead in the points table.

Crowd pleaser Sebastien Loeb is confident that previous testing at Holjes will stand him in good stead. “This is the first time this year that I have previous knowledge of a circuit,” explained Loeb, who is currently joint third in the drivers’ standings alongside Johan Kristoffersson. “It’s a complex circuit because there are a number of blind corners and you need to be on the right line all the way round – I saw that for myself when I came testing here.”

Since the previous World RX round in Norway, several of the permanent World RX drivers have been busy with other projects. In the UK, both Ken Block and Liam Doran attended the world’s biggest motoring festival – The 2016 Goodwood Festival of Speed – where they drove their rallycross Supercars up the iconic Goodwood hill. Doran also attended the recent Matterly Basin MXGP, while the JRM Racing team have been busy testing its two-litre development engine ahead of Holjes.

Round five winner Andreas Bakkerud and his team-mate Block gained extra seat-time in the Hoonigan Racing Division Ford Focus RS Supercar when they tested at Lydden Hill ahead of Goodwood. Ekstrom attended Le Mans, taking Hollywood actor Jason Statham and several others for a passenger ride in his Audi S1 EKS RX quattro. The quattro also featured at Goodwood, with Andrew Jordan driving the RX machine while team boss Ekstrom contested the DTM round at Norisring on the same weekend.

Last week Solberg attended the fourth annual FIA Sport Conference in Turin where he promoted rallycross speaking in front of the industry’s biggest movers and shakers. Over in Latvia, ALL-INKL.COM Muennich Motorsport’s Reinis Nitiss tested a powerboat ahead of the European Powerboat Championship round that is taking place in Latvia later this year.

Volkswagen RX Sweden’s Johan Kristoffersson won the opening Anderstorp race in STCC where he headed the field from pole position. Elsewhere, World RX Team Austria driver Janis Baumanis secured his first victory of the season by winning the latest round of the Estonian Rallycross Championship, driving a Ford Fiesta. Other drivers have been focused on their fitness ahead of the Swedish RX round including brothers Timmy and Kevin Hansen who have completed extensive training on their bikes.

As well as the headline World Championship, 28 Supercars will compete in the highly competitive FIA European Rallycross Championship where Sweden marks the third round of the season. Kevin Hansen currently leads the standings thanks to victories in both Belgium and Norway but will face stiff competition from a further 27 Euro RX entries including the likes of Swede Lukas Walfridson who makes his first start of the season in a Renault Clio.

There are 18 starters for the RX Lites Cup – the largest entry in the three-year history of the series – where just a single point separates France’s Cyril Raymond and Norway’s Thomas Bryntesson at the top of the table. Bryntesson drives with JC Raceteknik which will run a total of five RX Lites cars in the event. Former Super1600 podium finisher Johan Larsson will make his debut in the series, as will Santosh Berggren, driving the car that Kevin Hansen used to win last year’s title.

Paul Bellamy, World RX Managing Director for IMG, commented: “Holjes is the event that everyone wants to win: it’s one of the most popular tracks in the World RX calendar which features quick corners, banked turns and a jump which can see the cars travel as far as 40 metres in the air. Not only do the drivers love the circuit but the fans flock to Holjes in their tens of thousands to camp and experience the magic weekend. Recently we signed a new three-year deal with Holjes and each year we look forward to making this event even bigger and better than the year before. With only five points separating Ekstrom and Solberg in the drivers’ championship, it’s going to be all to play for as we get ready to approach the season’s half-way point.”

Jordan to compete at Goodwood in Audi Rallycross car