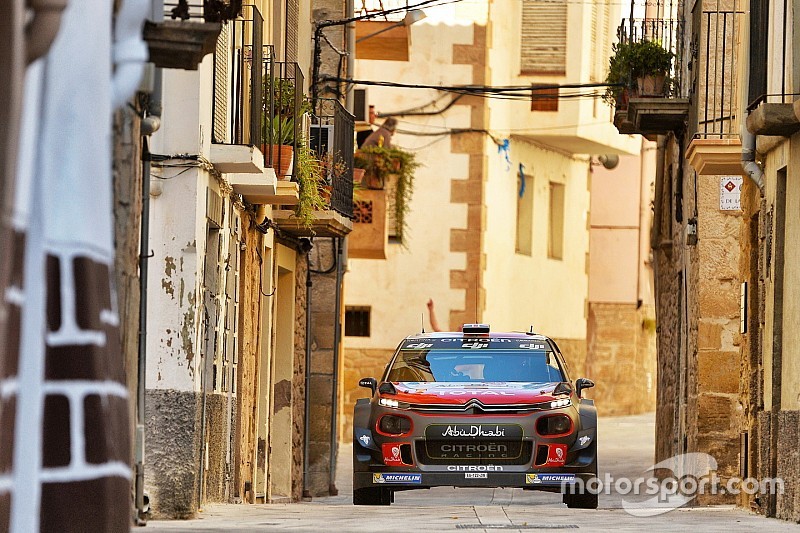 In SS12 Savalla, both Dani Sordo and Andreas Mikkelsen crashed, from second and sixth overall respectively, by hitting the same rock. Both driver retired from the event.

Up front, Kris Meeke’s day was formed by an epic run over the first stage of the morning.

He didn’t show blistering pace for the rest of the day but did what was necessary to keep his Citroen at the head of the order by 13-14 seconds for the majority of the day.

After taking second on the final stage of Saturday to Ogier, he leads the Frenchman by 13s, with Tanak just a further 1.5s behind.

Juho Hanninen scored two fastest times on the first loop of Saturday morning, and although he failed to take any more table-topping times in the afternoon, he found himself fourth overall after Sordo and Mikkelsen’s departures.

Neuville recovered to fifth after taking a fastest time through SS10 El Montmell in his fightback after hydraulic issues in the morning loop ending the day 53.2s behind leader Meeke.

Esapekka Lappi turned around his day after an inconsistent morning, matching the strong pace of his teammate Hanninen to overcome Mads Ostberg for sixth on the final stage of the day.

Ostberg is undergoing his first event on asphalt in a 2017 car, his privately-run Ford Fiesta WRC, and had a small off in the morning before finding his feet in the afternoon to hold seventh.

Stephane Lefebvre and Elfyn Evans sit eighth and ninth, with the final 2017 WRC car of Khalid Al Qassimi down in 20th.

Teemu Suninen has dominated the WRC2 class for R5 cars, leading Jan Kopecky by 44.4s in his M-Sport Fiesta.