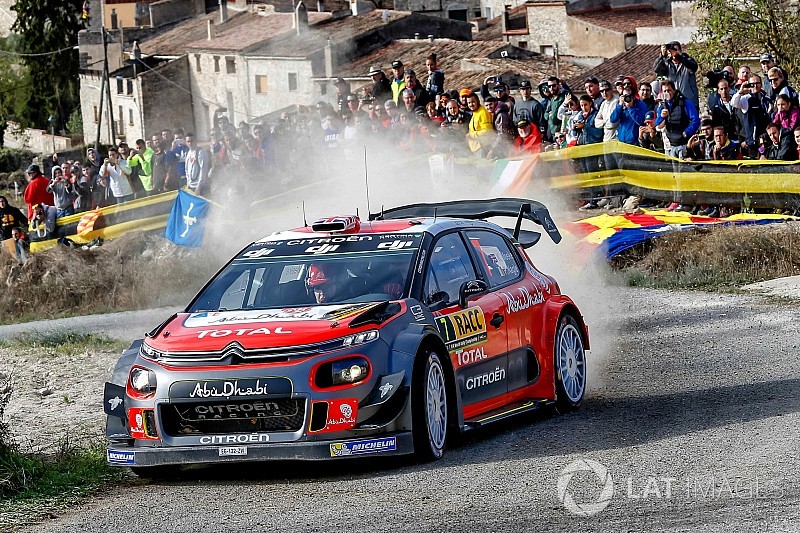 Kris Meeke won two more stages on his way to securing victory in Rally Catalunya as Sebastien Ogier edged ever closer to the 2017 WRC title.

After topping Sunday's three morning stages, Citroen driver Meeke also set the pace in SS17 and SS18 and kicked off the Power Stage with a sizeable advantage.

The Briton was only second in the final run of the event but still extended his gap over second-placed Ogier to win by 28s.

Meeke recorded his second victory of the season and his fifth in WRC overall.

Tanak, who completed the podium, is now one point ahead of Hyundai's Neuville, who retired from the event for good on Sunday morning.

Toyota's Juho Hanninen, the last driver to finish less than a minute behind Meeke, claimed his third consecutive top-four finish.

Privateer Ford entrant Mads Ostberg secured his best result of the season in fifth, 17 seconds ahead of Citroen's Stephane Lefebvre, as DMACK's Elfyn Evans was the fourth Ford in the top seven.

The top 10 was completed by WRC2 winner Teemu Suninen and the Skodas of Jan Kopecky and Ole Christian Veiby.

Suninen scored his first win in the category this year after finishing second in Sweden, France and Portugal respectively.

Other top class drivers to finish the event were Hyundai's Andreas Mikkelsen, 15 minutes adrift, and the third Citroen of Khalid Al-Qassimi.