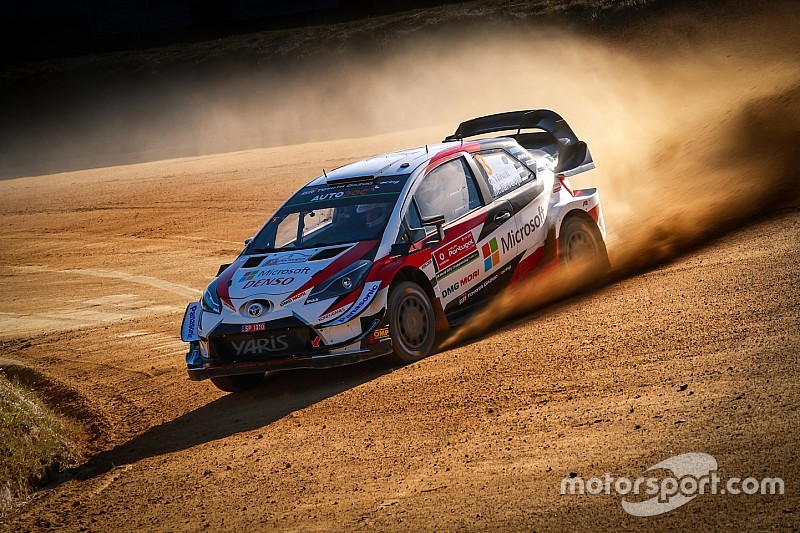 Hyundai’s Sordo was in a class of his own on the opening Lousa stage, stopping the clocks 4.2 seconds faster than Tanak’s Toyota - with both M-Sport’s Teemu Suninen and Tanak’s teammate Jari-Matti Latvala within 0.6s of the Estonian.

Tanak immediately responded on the Gois test, clawing 3.9s back from Sordo to trim the Hyundai’s lead to just 0.5s. However, the battle was defused as Sordo’s Hyundai slowed immediately on stage three.

Sordo was visibly frustrated as he tried to coax his i20 into life, with the car losing power and stopping several times with what is suspected to be a fuel-related issue. The Spaniard eventually made it to stage finish, but was 19 minutes off the pace.

Latvala lost a little ground on stage three Arganil to end the morning 6.9s shy of Tanak, confessing his teammate’s driving has been “amazing” given his road position.

Meeke completes the Toyota lock-out, but suffered a scare in stage two when the intercom in his Toyota Yaris WRC failed, forcing co-driver Sebastian Marshall to use hand signals instead. However, the British driver is only 14s away from the lead.

M-Sport’s Suninen is fourth after setting the third-fastest time on the opening stage, 3s behind Meeke. Suninen’s teammate Elfyn Evans completed the morning a curious fifth, 21.7s down on the rally leader after hurrying away from stage ends.

Championship leader Sebastien Ogier haemorrhaged time throughout the morning as the first car into the stages, sweeping the loose gravel clear for his pursuing rivals. The Citroen driver lost 23.1s to Tanak across the morning loop, but the defending champion made no mistakes to find himself in sixth.

On his first rally since his big accident in Chile earlier this month, Thierry Neuville admitted he was “too careful” on the opening stage before stalling at a junction and losing several seconds as he tried to restart his i20.

However he responded strongly on stage three, closing to within 0.5s of Ogier to lie seventh.

Citroen’s Esapekka Lappi had enjoyed a strong start to his rally, running sixth after the opening two stages. However the Finn picked up a front-left puncture on the final stage of the morning, dropping 1m14s and falling to ninth on the leaderboard.

Sebastien Loeb, who has replaced Andreas Mikkelsen in the Hyundai line-up for Portugal, had been lying ninth overall behind Ogier after the first two stages but came to a stop early on stage three in a similar fashion to Sordo.

The nine-time champion slowed to a halt mid-stage and began pumping his accelerator as he tried to troubleshoot the issue. He crawled to the end of the stage but lost 15 minutes.