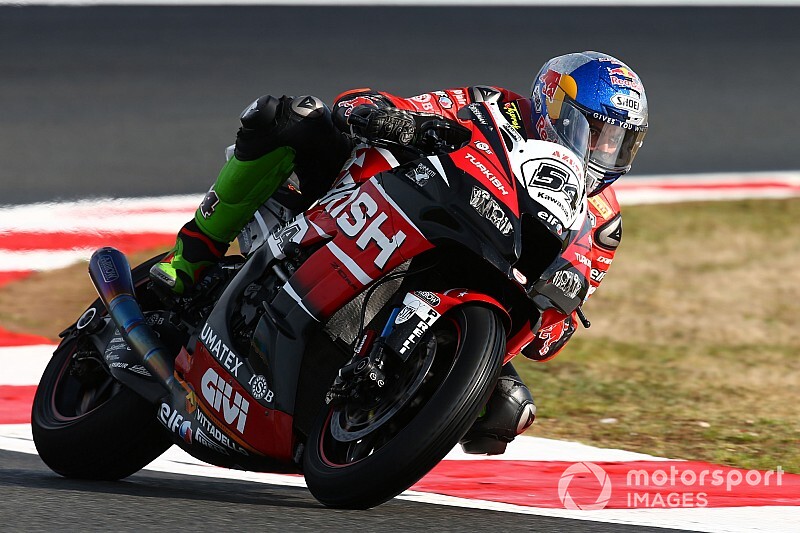 Toprak Razgatlioglu snatched a historic maiden victory from Jonathan Rea on the last lap of a thrilling 800th World Superbike race in the opening contest at Magny-Cours.

Dry track time ahead of the first feature race in France was limited to the 20-minute FP3 on Saturday morning, and this led to an exciting multi-rider scrap early on.

Van der Mark drew alongside Rea on the run into the Adelaide hairpin, with the pair clashing twice as the Yamaha rider tried and failed to pass Rea around the outside of the turn.

Behind, BMW’s Tom Sykes took third from Haslam at Turn 9 on the opening lap, before passing van der Mark into the Imola chicane to give former KRT teammate Rea chase onto the second tour.

Sykes used the nimbleness of the S1000RR to carve up the inside of Rea at the long right of Estoril, with Rea retaliating and resisting all the way to the Nurburgring chicane – ultimately losing out to the BMW.

Ducati’s Chaz Davies had worked his way from 11th on the grid to run this battle close, with Razgatlioglu moving up to fifth having started from 16th.

Davies quickly deposed Rea, and took the lead from Sykes at Adelaide on the third lap, though would lose the position to Sykes, Razgatlioglu and Rea after nearly high-siding exiting Turn 9.

In his bid to get back into podium contention, Davies crashed on lap four after making an ambitious lunge into Lycee at the end of the lap on Razgatlioglu for third.

This forced the Puccetti Kawasaki rider wide, allowing Rea through into second and putting him into a position to attack Sykes on the sixth tour at Adelaide.

Sykes resisted, with van der Mark taking second from Rea at Turn 13 after the Kawasaki rider had a moment applying the throttle exiting the corner before.

Van der Mark moved into the lead at the Golf kink on lap seven, while Rea dropped to fourth again after running wide at Adelaide.

The Yamaha rider was able to quickly build a second lead by lap nine, and opened that up to 1.6s at one stage as Rea went to battle over second with Razgatlioglu.

With seven laps remaining, Rea began to eat into van der Mark’s lead, and was within three tenths as they started lap 19.

Rea wasn’t close enough to strike on the run to Adelaide, but van der Mark cracked under the pressure and crashed.

The Ulsterman now held a 1.4s lead over Razgatlioglu, though the Puccetti rider put on a massive push on the penultimate lap to wipe a second out of Rea as the started the last tour.

Sliding his way into Turn 9, Razgatlioglu was on the rear wheel of Rea as they ran into the Imola chicane and made a pass at Turn 13 stick.

Taking an extremely defensive line into the final corners, Razgatlioglu prevailed by 0.240s to secure his maiden WSBK win and the first in the series’ history for a Turkish rider.

Rea’s second allowed him to open his championship lead to 100 points over Alvaro Bautista, who ended up fifth on the Ducati after starting 14th.

Sykes recovered late on to prevail in a battle with Ten Kate Yamaha’s Loris Baz to complete the podium, while Alex Lowes rounded out the top six behind Bautista on the Crescent Yamaha.

Leon Camier was seventh on the Honda in his first race since the Assen round, beating GRT Yamaha’s Marco Melandri, Go Eleven’s Eugene Laverty and the sister GRT bike of Sandro Cortese.

Haslam joined Davies on the sidelines, after crashing out of the top eight at the final corner in the closing stages.