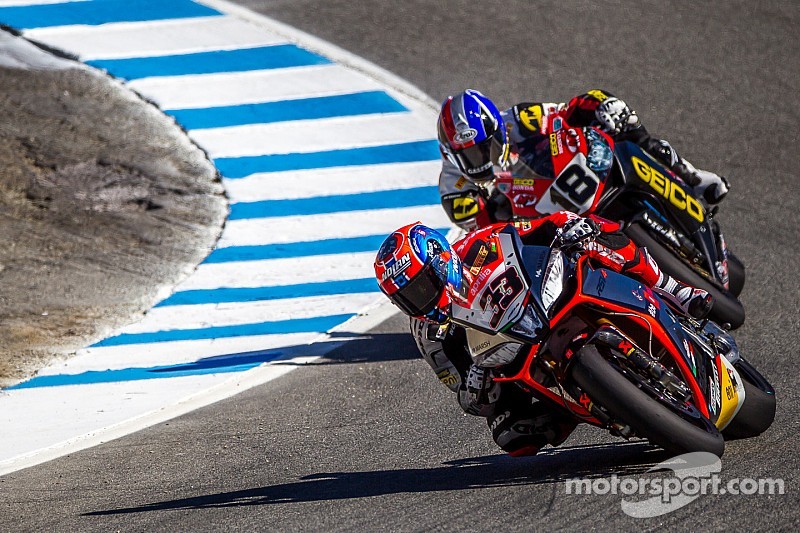 Melandri scored his 4th win as factory Aprilia rider and the 17th of his career.

Jerez (Spain) – In one of the closest races of the season so far Marco Melandri (Aprilia Racing Team) has taken the win in race one at Jerez after a 20 lap encounter that saw the leading group of eight riders exchanging places at almost every turn in the early stages. Melandri scored his 4th win as factory Aprilia rider and the 17th of his career.

From the start it was the Aprilia duo of Marco Melandri and Sylvain Guintoli who lead the pack with the Frenchman passing his Italian teammate at turn 3.

Loris Baz (Kawasaki Racing Team) took the lead at the end of the 4th lap and the two compatriots began to ease away. Not content with 2nd, Guintoli responded and retook the lead on lap 8 with the chasing pack, now led by Davide Giugliano (Ducati Superbike Team) closing in.

Giugliano, who had been passed for 3rd by Melandri, crashed out at the start of the eleventh lap while reigning champion Tom Sykes (Kawasaki Racing Team) also ran off the track at the end of the long back straight as he attempted to improve from 7th.

After running as high as 3rd on the opening two laps Alex Lowes (Voltcom Crescent Suzuki) crashed unhurt from 9th, he was followed a lap later by Loris Baz who went down after making contact with the back of Marco Melandri’s Aprilia.

At the flag it was all smiles in the Aprilia camp with Melandri coming home ahead of Guintoli with Chaz Davies (Ducati Superbike Team) taking the final podium position in 3rd.

Melandri does the double at Jerez