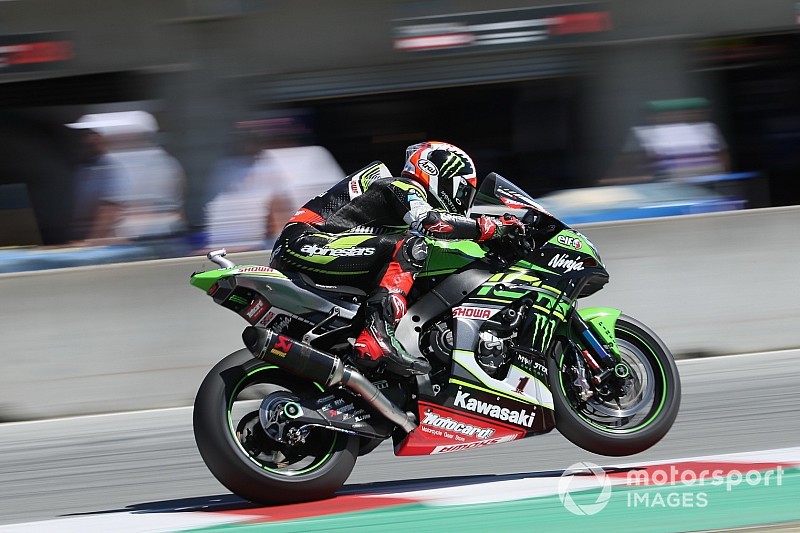 Jonathan Rea extended his World Superbike Championship lead to 49 points with victory in race one at Laguna Seca, after Alvaro Bautista crashed again.

Holding a 61-point lead during the Jerez round, four feature race crashes in as many rounds have completely transformed Bautista's fortunes, while reigning champion Rea eased to his fifth-successive win to extend the advantage he established last week at Donington Park.

Poleman Rea grabbed the holeshot off the line on the Kawasaki, with Tom Sykes briefly putting the BMW into second on the run to the Andretti hairpin before being shuffled back to fourth by the Ducati duo.

Bautista led the charge against Rea, although teammate Chaz Davies – who opted for the SCX tyre specifically designed for the sprint race – scythed underneath him at Turn 10.

Rea ran under close attention from Davies for the next few laps, with the Ducati attempting a daring siege on the lead through the fast left at Turn 1 on the fifth tour.

Davies emerged into the Andretti hairpin just ahead, but ran wide and allowed Rea to muscle his way back into the lead.

Bautista remained right behind the pair, but his hopes of victory evaporated when he lost the front of his V4 R heading into Turn 5.

He would re-join the race on his damaged bike, and took the chequered flag a lap down in a pointless 17th position.

By lap 11, Rea started to open up a margin over a Davies beginning to lose grip in his SCX rubber, with the Kawasaki rider eventually easing close to six seconds clear in the latter stages.

Unopposed across the final lap, Rea cruised towards the chequered flag to tally up his eighth win of the season.

Sykes trailed Razgatlioglu to get the BMW home in fourth, with Alex Lowes the first of the Yamahas across the line in fifth ahead of Pedercini's Jordi Torres and his Crescent teammate Michael van der Mark.

Wildcard JD Beach was sitting in 11th when he had to pull out at mid-distance when his Attack Performance Yamaha developed an issue. Kawasaki's Leon Haslam crashed at the Corkscrew on lap four.