Muscle Milk picks up seventh win in a row at COTA

The Muscle Milk Pickett Racing team will be back in action in two weeks time at Virginia International Raceway for the Oak Tree Grand Prix at VIR from October 3 - 5, 2013.

Austin, TX - Muscle Milk Pickett Racing scored a seventh consecutive American Le Mans Series victory on Saturday at the Circuit of the Americas thanks to a commanding performance by drivers Lucas Luhr and Klaus Graf. 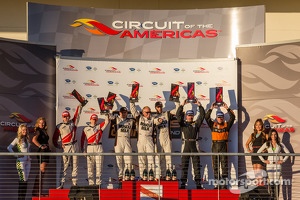 After a day of inclement weather on Friday, the sun and heat returned to the Austin race track on Saturday, providing perfect weather for the Muscle Milk team to show its strength around the 3.4-mile circuit.

Starting from pole position, Lucas Luhr maintained the lead from the first turn on and never looked back. The German kept building a gap with each and every lap and it was with just over an hour in the race that he took a one-lap lead.

Luhr came into the pits on lap 56, with about 54 minutes to go for fuel, a new set of Michelin tires and a driver change to Klaus Graf.

Although, the team had a comfortable one-lap lead, they didn't stop pushing. Graf went on to put another lap on the #16 Dyson Racing car with 24 minutes remaining in the two hour and 45 minute event.

The win was the 48th career ALMS victory for Luhr and 21st for Graf. With their triumph in Austin, the team extended their record-setting overall win streak to seven.

The Muscle Milk Pickett Racing team will be back in action in two weeks time at Virginia International Raceway for the Oak Tree Grand Prix at VIR from October 3 - 5, 2013.

Lucas Luhr - driver #6 Muscle Milk HPD ARX-03c: "The start was pretty straightforward. The Dyson car was a little quicker than me down the straight, but I knew that in the first corner I could get him back. From then on, I just drove my race. I struggled a little at the start but after a few laps the car was great. It was our first laps in the dry here this week and it was significantly hotter than it was on Friday.

"The car was very good, very fun to drive and I enjoyed driving the Muscle Milk HPD a lot around here. It's a great facility to race at.

"As Klaus mentioned, with the season coming to an end you get a little more sad because there are always fewer races left for the P1 car. As Klaus said, these cars provide a lot of satisfaction for the drivers to drive and we want to enjoy the last two races and hopefully get two more victories for Muscle Milk Pickett Racing."

Klaus Graf - driver #6 Muscle Milk HPD ARX-03c: "It was another great day for Muscle Milk Pickett Racing. Lucas did a great job to take the lead in the first corner and we had a really good gap by the time I got in the car.

"With almost no dry running here this week for us, I have to say hats off to our HPD and Michelin package. We tested here in December when we had just updated to the ARX-03c and that certainly helped even if the conditions were different. However, since then we've really put together quite the package and I think the lap times Lucas and I did today showed that, especially if you compare with the WEC qualifying times. We're very happy about that. We have great partners with HPD, Michelin and Muscle Milk.

"We're coming to the end of the P1 class, for the foreseeable future, and everyone who drove this type of car will be sad because it is very satisfying to drive, especially here in the 'esses'.

"We want to enjoy the last couple of races with it and keep winning, in particular, Petit Le Mans, where we came up short last year. That would bring Lucas to 50 wins and that would be unbelievable."