Nick Heidfeld proved today that he is not just a one trick pony by taking the reins of the #12 Rebellion B12/60 Lola-Toyota and qualifying it in third place for the start of the 12 Hours of Sebring. Heidfeld recorded a time of 1:46.456 on his first flying lap just ahead of Klaus Graff in the #6 Muscle Milk HPD. In addition to the second row starting position, the German driver claims the first place of the American Le Mans Series entrants.

Andrea Belicchi, behind the wheel of the #13 B12/60 Lola-Toyota recorded a best lap of 1:46.689, putting his car in fifth position for tomorrow’s start.

Competition is steep between the top three ALMS competitors. With only two tenths separating the two Rebellions and Muscle Milk car, tomorrow could prove to be a real race to the finish. The drivers of both cars, with Nick Heidfeld, Nicolas Prost and Neel Jani in car 12 and Andrea Belicchi, Mathias Beche and CongFu Cheng in car 13, will be fighting for a podium finish. The drivers in car 12 will be looking to score maximum points this weekend to take forward with them in their American Le Mans Series campaign. 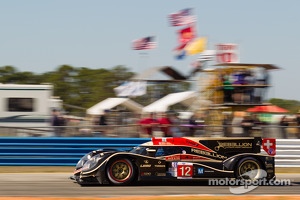 Nick Heidfeld - Lola-Toyota #12:
“I am very happy with how this afternoon went. To be honest I didn’t expect such a great result from qualifying. The first day of testing we were really quick, but for the rest of the week we were chasing the right set up. It was my first qualifying with the team, so I am very pleased to have made such a good impression. It was also exciting to have a free track again. I went in thinking the second flying lap would be the quickest, but then I felt that the grip wasn’t bad after the out lap and that I should go for it. Obviously it was the right choice because it was the quickest lap before the tires started going away. I think it was the most that we could have achieved, so I am really happy with the results.”

Andrea Belicchi - Lola- Toyota #13:
“Unfortunately, we chose the wrong window to go in the car and I got caught up in traffic. When I finally found a clear lap, my tires had lost top performance. I'm a bit disappointed because we had recorded some good lap times during last practice session. Nick did a good job in qualifying, placing the #12 in third, just behind the Audis, for the start of the race. It's a good result for him and for the team, and I'm happy for them. The most important for me is that we have a good set-up with the car which makes me confident for the race.

Bart Hayden REBELLION Team Manager:
“I am very pleased to have secured the best privateer spot on the grid. I would like to thank the team for their hard work this winter in preparing the cars for this season. I am proud of their efforts which helped us to get the most out of the qualifying session today. Our results put us in a good position to challenge the fastest cars for top positions in the race tomorrow.”

Ollie Millroy will return to the Asian Le Mans Series this season with the same Team AAI squad for whom he helped secure the 2014 GT Teams’ and Drivers’ titles.

The motorsports world suffered many losses this season, and are remembered in this top moment story by Motorsport.com.