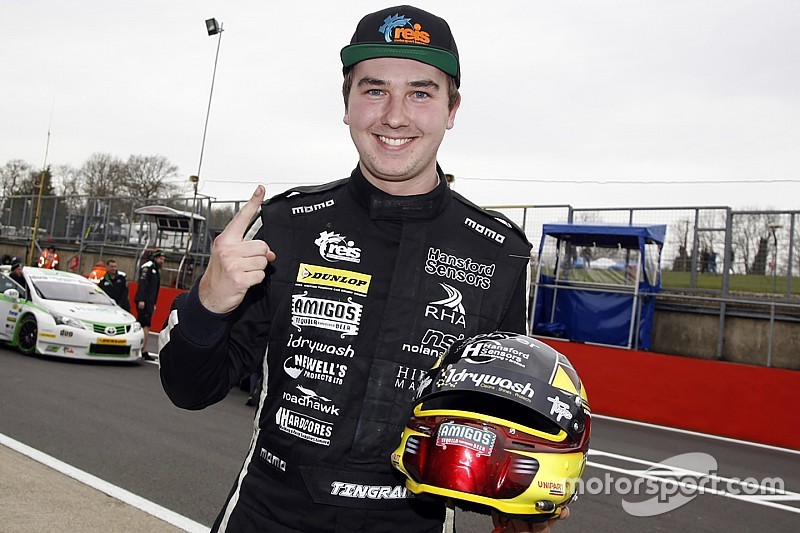 Tom Ingram took a lights-to-flag victory in a frenetic opening round of the 2016 BTCC series as the theme for the morning appeared to be inter-team incidents.

The Speedworks Motorsport driver put in a stellar performance from the top spot on the grid, holding off a strong early race charge from Team Dynamics’ reigning champion Gordon Shedden before controlling the race all the way to the finish line.

Within the first two laps of the race, two pairs of teammates almost came to blows, with the West Surrey Racing pairing of Sam Tordoff and Rob Collard coming together at Surtees, sending the former into the infield.

Later that same lap, Andrew Jordan and Mat Jackson almost had an almighty crash on the start straight, with Jackson putting two wheels on the tiny patch of grass between the tarmac and the pit wall to get past his team-mate.

Elsewhere on an action-packed second lap, Colin Turkington and Michael Epps had an incident at Graham Hill Bend, with the latter being sent careening up the grass run-off while Turkington had some front end damage.

The following lap would see an almighty crash for Alex Martin down the Cooper Straight, as he tried to avoid Hunter Abbott’s ailing Power Maxed Racing Chevrolet Cruze, with the Ford Focus bouncing heavily off the barriers.

Further down the order, contact between Josh Cook and Adam Morgan at Clearways dropped Morgan down a handful of places, and struggled to get back up through the order.

Despite setting the fastest lap of the race, Jack Goff couldn’t transform it into a strong race performance and began to fade away towards the end of the race, just managing to stay in the top ten at the chequered flag.

Ingram took the flag ahead of the Team Dynamics duo of Shedden and Neal, with Ash Sutton and Cook rounding out the top five.

Despite his incident with his team-mate, Collard carried on to sixth, with Aron Smith taking the ex-Team BMR Volkswagen CC to seventh, followed by Jackson, Morgan and Goff.

Jake Hill and Dan Welch took points in the first race of their campaigns in 13th and 15th respectively, while Jordan, Aiden Moffat and Jeff Smith also scored.

The new Team BMR Subaru Levorgs struggled, with Warren Scott failing to make it onto the grid with a propshaft issue, Turkington getting involved in an incident and Jason Plato and James Cole having to settle for 21st and 25th respectively.